“When they had heard the king, they departed; and, lo, the star, which they saw in the east, went before them, till it came and stood over where the young child was.

When they saw the star, they rejoiced with exceeding great joy.”

Bible Study Fellowship International has been studying the book of Matthew this year. How perfect it is, then, that I can fold each member of my group a star in remembrance of that which appeared before the Wise Men.

These are only seven of the sixteen I folded yesterday. While my hands are a little sore, there is nothing I like quite so much as origami ornaments on my tree.

Here is a geometrical one, of many, which hangs on a miniature tree in our dining room. I don’t even recall how to fold it, as I made it many years ago with paper my parents brought back from one of their trips. True Japanese paper is very forgiving, almost like cloth; perhaps that is one of the reasons I like it for Christmas…

Ever since I put up the announcement for the Japanese Literature Challenge 15, I have been thrilled to see the response. There is a desire to continue with it, and #January in Japan, even after a decade and a half. So, I am compiling a list of my own, too, and I was thrilled to discover these two books at our local library:

The Woman In The Purple Skirt by Natsukawa Imamura. Penguin Random House says, “A bestselling, prizewinning novel by one of Japan’s most acclaimed young writers, for fans of Convenience Store Woman, Eleanor Oliphant Is Completely Fine, and the movies Parasite and Rear Window.”

So, I will definitely begin with these before moving on to others such as Haruki Murakami’s latest, Murakami T: The T-Shirts I Love.

And you? Are you planning to make anything to decorate your tree? Or, something to read for the Japanese Literature Challenge 15?

First, fold the (square) paper from corner to corner, twice. Do this so that there is a “+” sign in the middle.

Fold the top corner to where the folds intersect.

Fold the bottom corner up to the very top edge.

Lay the bottom edge against the middle fold and crease.

Lay the other bottom edge on the middle fold and crease. Flip the whole “heart” over.

Fold down each point on the top, and fold in the two on the sides. Flip over again.

Here is your completed heart.
I showed the children in my class once, and they have been folding hearts all week in anticipation of Friday’s party. For Valentine’s Day.
Third grade is the perfect age for getting excited about cards and hearts, chocolate and friendship.
May you feel the same kind of joy.﻿ 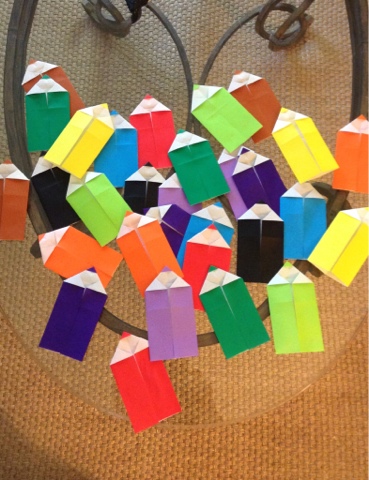 …and post about books.
These origami pencils will adorn my classroom door, with a wonderful quote from James Dyson, the vacuum cleaner inventor. “The computer dictates how you do something, whereas with a pencil you’re totally free.”
Not that I dislike computers.
But, pencils and one’s own imagination should never be underestimated. 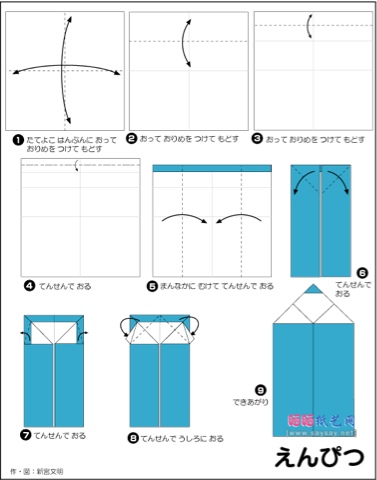 I’m always on the lookout for a new read-aloud for my third graders. Usually, I like to introduce them to classic literature no one else reads them such as Carlo Collodi’s Pinocchio. Or, Edith Nesbit’s Five Children and It. But, knowing my great passion for origami they begged me to read The Strange Case of Origami Yoda by Tom Angleberger, and I have to admit that I enjoyed it almost as much as they did.

The strange case is that Dwight, an awkward and nerdy middle school boy, has an origami Yoda finger puppet which has a unique ability to give exactly the right advice when needed. So the strange case involves answering the question, “Can Origami Yoda be real?”  Each chapter is a little scenario where Origami Yoda saves the day.

For example, when Kellen accidentally leans across the sink in the bathroom he discovers that only the front of his pants is wet. It looks, unfortunately, as if he has wet himself. But, the Origami Yoda puppet on Dwight’s finger advises him to wet all of his pants before going back to class. Then the one spot is no longer conspicuous. This is the stuff that children love. It is too funny for words. Plus, what if Origami Yoda is real? At the end of the book, after reading many accounts of Origami Yoda giving sage advice, the reader must decide.

I can’t answer that. I can only show you the finger puppets which my third graders made, holding them up in all the appropriate places when Origami Yoda speaks

And, I can leave you with the suggestion that if you have an elementary or middle school child, “Read this book you should.”

I’ve been  folding origami doves for a shower present to give to my dear friend’s daughter.

They are a symbol of peace and good will, perfect for this time of year and marriage.

This particular model is a variation from one designed by Kunihiko Kasara,

and I think it looks lovely on the Christmas tree.

I also bought myself a Nook HD.
I was torn between the iPad mini and the new Nook, but I felt like the iPad mini would just be a big iPhone without the capability of calling anyone. I specifically wanted a device for reading, and that is why I decided on the Nook HD. Of course, I can check my email, I can surf the web, and I can blog on it. So maybe this is just another huge time sucker. But, I don’t care. I’m a Nook junkie, owning the first generation, the Simple Touch, and now this.
Between folding doves, and learning how to operate my new toy, Winter Break Christmas Vacation is sliding right by.

Last year, I gave each of my students a Valentine bookmark. This year I’m giving them a kiss. If you want to give your Valentine such a kiss, here are the directions:

Fold a sheet of square paper diagonally, with the color inside.

Fold the triangle into approximate thirds along the bottom so that the overall shape resembles a house.

Fold the outermost point up to the top point of the flap. Do this on both sides.

Fold each point straight down. Do this on both sides.

Make little triangles off to the sides,

then fold each point sticking over the edge into a tiny triangle of its own.

Now carefully unfold the entire sheet of paper, but don’t press it flat. You’ll need the creases for subsequent folds.

Find the little triangle at the top of a corner and fold it down.

Now fold the sides down on the existing creases. This can be a little tricky, so play with the folds gently until you have them just right.

Do this on both sides.

Turn the paper over, and fold up on the horizontal line. Do this on the opposite side as well.

Pinching the two “lips” together, fold the whole thing in half while keeping them tucked inside

Leaving it slightly open, fold one point in.

Then, do the same for the other side.

Fold in half again on each side.

You’re done! By gently opening and closing the card, you can see the lips give a kiss.

Such a fun valentine!

I had several requests for how to fold the star in the previous post. I wanted to take photographs of each step, but I think it’s easier for me to just photograph the direction pages and put them up for you to see. Don’t be discouraged; did you see these pages come from the “simple” level? Just choose a paper you really like. I used Japanese paper, but beautiful gift wrap works nicely too. (Or, a page from an old book.) Simply cut it in 4″ squares.

This book by Gay Merrill Gross has many wonderful things to fold, but it’s rather hard to find. Perhaps on amazon or eBay? In any case, you have the directions for the star above.
Have fun folding!
Tanabata’s August theme for Hello Japan is origami.
Woo hoo! I love origami. I’m passionate about origami. I use it to reward children in my class, both with objects I’ve folded and with lessons on how to create it. I decorate my classroom with origami, and I decorate Christmas trees in our home with origami. (My favorite is the white cranes which I’ll have to show you when Christmas next rolls around.) I fold it whenever I need to calm my nerves because to me it’s very relaxing to work with my hands while emptying my mind. Plus, I haven’t the faintest idea how to knit.
Here are a few of the things I have to show you:

a bottle of miniature stars…

a few of the cranes which will eventually amount to 1,000…

﻿
and origami bookmarks which when placed over the page of a book look like this:

It’s so much fun to fold. I only caution you against ordering special paper on eBay; while the packages may be less than $2.00? One must take into account the shipping from Tokyo to Illinois.
(Since publishing this post, I have added photographs and directions for how to fold two kinds of bookmarks here. Also, the text stars I folded are here.)
﻿

Fold three corners into the center, but leave the fourth extended.

Fold the bottom left corner up to the upper right corner.

﻿Fold the top left corner down to the bottom.

Finally, fold the corner which has been left out to the side into the opening of the top flap. You now have a triangular bookmark to put over the corner of the page you’re reading.
Here’s the second version:

Fold the bottom left point up to the top.

Fold the bottom right point up to the top.

Unfold the two points, and fold the middle point straight down so it touches the bottom.

Bring the bottom left point up and fold it behind the top layer.

Bring the bottom right point up and fold it behind as well. Now your bookmark is finished.

Here are the two completed bookmarks.

Here it is placed over the page.
Happy folding! Better yet, happy reading! May your place never be lost.
Don’t tell Alexandre Dumas. I used the pages from my paperback edition of The Count of Monte Cristo for some things I wanted to make out of origami. (Read, reuse, recycle, right?)

First, I tore out the pages:

Then, I cut them into 4cm by 8 cm rectangles:

By inserting one into the other, all eight together make a wreath like this:

which I plan on hanging from real pine branches (thank you, storms from the Springtime) in my classroom with these:

Aren’t they intriguing when piled on top of each other?

I can only imagine them suspended from a green silk ribbon, gently swaying above our desks…It’s projects like this which make me excited to go back to school. As if I was eight years old myself.
(If you want to make the wreath, I found the directions here. As to the stars, they’re in one of my origami books.)
Join 2,167 other followers