Reading Love In the New Millenium is like dreaming a bad dream: disjointed things are happening on every page, with no clear significance or meaning (to me).

“Do you understand everything now?” she asked.

Wei Bo did not understand at all. What sort of woman was A Si’s mother? Why had Long Sixiang wanted him to come here? His sole impression was that the old woman had a cruel temper.

“No, Sixiang, I don’t understand.”

These are the kind of nonsensical sentences that fill the pages at the beginning of this book.

“People come and go so quickly here!” said Dorothy in The Wizard of Oz. And they do in Can Xue’s world, too. We don’t really know Wei Bo, except that he is forty-eight and works in a soap factory. We don’t really know any of the women who are a part of his life: Niu Cuilan or A Si (his lovers); nor Xiao Yuan, his wife. We discover that Cuilan and A Si worked in the cotton mill, and then gained employment in the health spa as prostitutes; the later life-style seems easier than the former. There are also Long Sixiang and Jin Zhu, the Gold Pearl. They have left working in the cotton mill as well, to become prostitutes though they are old and had a hard time getting started in the business. These women come and go from Wei Bo’s life with relative ease.

Many things go in and out of Wei Bo’s life. I don’t know what to make of paragraphs like this one, involving an elderly woman who has sung La Traviata for forty years, and walks with Wei Bo after the performance.

“Over on that side, in the fifteen-story building. It’s been lovely to take a walk with you.

The actress walked in the direction of the tall building. A gust of wind lifted her black skirt, and Wei Bo saw her fly upward like a great bird, both feet leaving the ground. She alighted at the entrance to the building. The door opened itself, she all but flapped through it, then the door shut. The large black door with its pair of copper ring handles made a mournful impression. Before long her aria emerged through an upstairs window, although Wei Bo could not understand a word…” (p. 74)

Wei Bo could not understand a word? Neither, sadly, could I.

Most of this novel was incomprehensible to me, and it frustrated me as I read. But, I could not put it down. It called me to continue, to wander down the path that Can Xue created so that I could see what might lie ahead. Or, under a leaf. Or, in the fifth room of a cave dwelling. The occurrances in this novel are bizarre, to be sure, but the imagery is quite astonishing. Like the vivid cover on the front, there is a richness in design and color which mimics the writing inside. It is like nothing I have ever read before. I don’t know what to make of it. But, I think I like it.

Her songs aren’t about our past life, or about the emotional life of people today, but instead about the life we have never even imagined.

(Thanks to Yale University Press for a copy of this book to review.)

Find a most excellent review of this novel here.

“The higher-ups also said, This is good. Let them labor; that way they can be commended and reformed. Let them labor day and night, so that they may thereby be reformed and remade. Regardless of where they were originally located – in the capital, the south, in the provincial seat, or in a local area – and regardless of whether they were originally professors, cadres, scholars, teachers, or painters, they all must come here to work and create, to educate and become a new people. They will remain here for two, three, five, or eight years, or even their entire lives.”

Almost immediately we are thrust into the heart of the story which takes place in a Re-Ed camp, the ninety-ninth district, in which peoples such as the Author, the Scholar, the Theologian, the Musician, the Technician, and the Physician are all led by the Child. They are there to be “re-educated” for something they have done has upset the government during the period in China from 1958-1962.

The Author is promised a special reward if he writes an account of all that goes on. “The higher-ups have proposed a title, which is Criminal Records. They say that each chapter should be fifty pages long, and ask that whenever you finish fifty pages you turn them in and they will give you another fifty blank sheets of paper. They say that as long as you finish this book, not only will they allow you to return to the provincial seat to be reunited with your family, but they will have the book printed and distributed throughout the country. They will reassign you to the capital, to be the leader of the country’s writers.” And so it is his pages that we are reading, some which he writes for the government, some which he keeps for himself.

Parts of it reads like a joke. The Child, who is partly wise, but mostly naïve, comes up with a reward system like one would find in an elementary school. “Beginning today, we will implement a Red Blossom and a Pentagonal Star system. If you earn an award, we will also issue you a small red blossom. If your receive a blossom, you should post it over your bed, and every month you will be evaluated. Once you have five small blossoms, we will award you a medium-sized one, and once you have five medium-sized blossoms, we will award you a large pentagonal star. Once you have five stars, you will be permitted to return to your family, your work unit, and your lecturn. You’ll return to your laboratory and your library, and won’t ever have to come back here to be re-educated with the other criminals.” The result of this proclamation is that everyone scurried around looking for people to tattle on.

There is no endeavor held out by the higher-ups that the Child will not accept. First he is determined to smelt 100 tons of steel from black sand, a plan devised not by him, but by one of the “criminals” within the camp.  When he gets the workers to accomplish this near impossible task , because perhaps 20, 30 or even 40 of them will be permitted to return home for reward, he is told next that he must make a piece of high quality steel.

But when the Child presents a red star at the provincial seat, it is deemed second best to an inferior steel star imprinted with the word Loyalty. Now he must produce a “ten-thousand-jin-per-mu” field of wheat with grains as big as ears of corn.

The Author promised that he could make such a thing possible, and in his attempt discovered that drops of his own blood, mixed with water, caused the grains of wheat to grow larger than peas or peanuts. When everyone saw this, they believed that blood could produce extraordinary crops. “That autumn, the entire district was full of the smell of blood.”

Will it ever be enough?

Fragments of Christianity are thrown in these pages, such as: “The name Jesus means savior…and a savior refers to someone who will always, always go into adversity to rescue others.” But, no one is a rescuer in this novel, especially when the country is later consumed by famine. Lianke references mythology to tell the story of the crisis which happened in China during these years.

We are left with the idea that punishment becomes an ordinary condition, and is therefore no longer considered God’s punishment for our transgressions. But, by becoming accustomed to  punishment, we come to accept absurdity and hardship, fearful of a new and worse punishment. It is a graphic picture of a horrible government which makes me shudder in how un-myth-like it all is.

Find another revier here at ANZ Litlover’s blog, here at Stu‘s and at Clare‘s, here at Grant‘s, and here at Tony‘s. 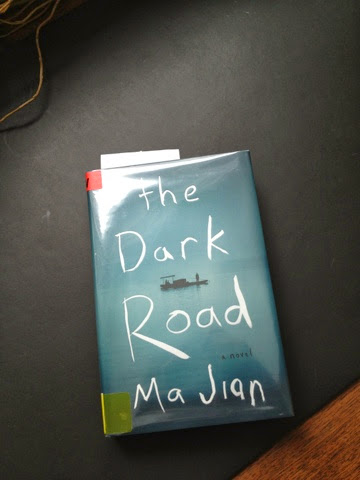 “Men control our vaginas; the state controls our wombs. You can try to lock up your body, but the government still owns the key. That’s just woman’s fate.” p. 29

Meili and Kongzi are a couple whose home has been destroyed by the family planning officers who enforce China’s One Child Policy. Now they must live by their wits, feeling lucky to be able to afford a houseboat on which they live ensconced by the filthy Yangtze River. It is filled with trash, and corpses, and pollution, but this is still the water they boil to drink. The water they use to wash. The water which will hopefully carry them to a better life.
Their journey is fraught with despair, filled with fear and filth. While Meili longs to wear high heeled sandals and work in an air-conditioned office, her husband longs for a son who will be the seventy-seventh descendant of his line from Confucius. Once he was a teacher, now he, his wife and his four year old daughter are fugitives hoping for a brighter day as they travel the dark road.
As a member of the shadow jury for the IFFP, I rate this book 5 out 10 for writing, 6 out of 10 for story and 6 out of 10 for longevity. It is a heartbreaking story which, as I commented to Stu, left me simultaneously grateful and guilty for the life I have in America.
Loading Comments...