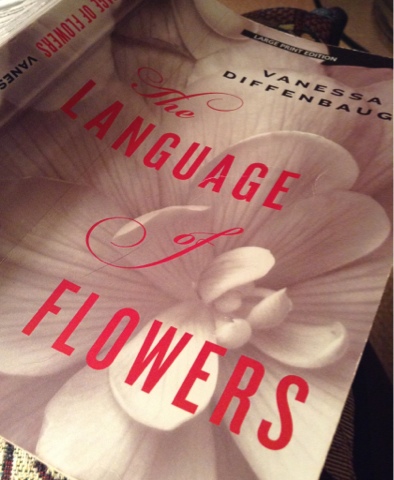 It was unrealistic to think I could make a clean break from the way I had lived for nineteen years. There would be setbacks. I had spent my life being hateful and solitary, and I could not, overnight, become loving and attached.”

It is rare when a novel speaks to the very core of me. Especially one which has been written in the 21st century. But Victoria, the girl who is 18 when we first meet her, captured my interest and my imagination from the very first page.

Whereas Ian McEwan’s character, Briony, (in his novel Atonement) makes me want to first shake and then soundly slap her, Diffenbaugh’s character makes me want to open my home and serve her a full course dinner. She is not necessarily lovable, not lovable in the sweet, kind, and obedient way I always strived to be as a child so that people would love me. No, Victoria is feisty, angry, and wounded, and she has every right to be so

Handed from foster home to foster home, none in which she is loved, Victoria learns to distrust people, and worse than that to distrust herself. She sabotages every relationship which comes her way, because it is easier to flee than to see if she will once again fail

But Victoria learns to communicate with flowers, for each particular name has its own meaning. (Aloe: Grief; Baby’s breath: Everlasting love; Chrysanthemum: Truth; Daisy: Innocence; Eucalyptus: Protection…) It is a gift that she learned from Elizabeth, the only woman who ever seemed to be a true mother to Victoria.

The novel discloses a secret in Victoria’s life, one from which she has run since she was ten years old. But after it is uncovered, and she has run away once more, she must decide if she has the courage to claim what she really loves, a family, and the courage to accept that they do, after all, love her. Because to live in a family, one must be loving but also embrace the love which is offered in return; a very hard thing to do for those who feel unworthy.

This is the novel I’m giving away for World Book Night on April 23. I think it should be on everyone’s shelf.