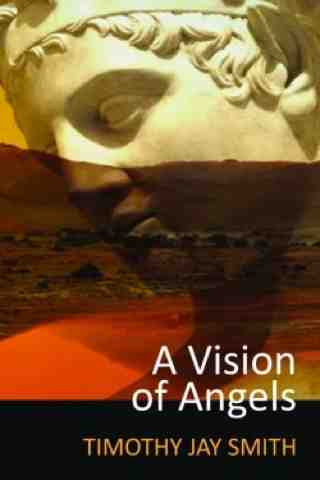 “A terrorist attack planned for Easter Sunday in Jerusalem sets off a chain of events that weave together the lives of an American journalist, Israeli war hero, Palestinian farmer, and Arab-Christian grocer.”

It is with a gentle and unbiased hand that Timothy Jay Smith writes of the conflict in Jerusalem. Where other novelists had me recoiling in horror when portraying some Middle Eastern characters (Khaled Hosseini comes to mind), I found myself feeling a deep and sympathetic compassion for the characters developed in A Vision of Angels. These are:

Major Jakov Levy (known as rhe Saint of Sinai) and his wife, Leah; their son, Mishe, (called a good Samaritan, an archangel, a revolutionary); and their daughter, Rachel;

David, the American war correspondent;
Captain Sa’eb al-Rayes, the Senior Security Officer in the Gaza Strip;
Amin Mousa, from one of Gaza’s prominent families, bringing tomatoes across the border;
and Chief of Staff Ben-Ami, who is Levy’s friend.
The central plot has to do with 15 kilos of Semtex which have been smuggled into Jerusalem on Easter Weekend. But, it is much more complex than that. For in examining the way that Jews and Palestinians abide together, or fail to find peace especially in this most holy of cities, Smith examines our own individual roles. Our own inability to find peace no matter how desperately we may search.
How well I understood Jakov Levy questioning his parenting. “What could he have done differently? What could he have done for this day never to have come? His questions conjured a host of remembrances and what-ifs, but nothing that directed him along a new path or to a different destination…All these fragments, these distilled moments that take on profound meaning in hindsight were nothing more than stitches in life’s whole cloth, and Jakov knew that each stitch he examined would be sewn and knotted again should time’s wheel reverse itself, for the unraveling in the present could not have been seen in the past. He was shaken to his soul by the certainty that their wretched fate was the sum of naive actions.”
Or, the journalist David Kessler who “had been on an emotional roller coaster all day, his sorrow turning to rage turning to sorrow turning to rage and turning again. He felt as impotent to guide his own destiny as any soldier whose story he had ever told.”
Or, the hopelessness experienced by Sa-eb who wants to call Major Levy to comfort him in his loss, yet what could he say? “With the weight of misdeeds and missed chances burdening his thoughts, he replaced the receiver.”
Yet the most powerful point which Smith makes, to me, is about the futility of war. Mari, in planning with the Peace Now organization, says, “I have two kids, and I want things to be different for them. We win every war, and what’s our victory? What’s our prize? Another war. It’s always another war, and it’s never going to change until we learn that winning isn’t victory. The real victory is never to fight again. Never another war.”
So I see Timothy Jay Smith extending an olive branch in his novel, an invitation to lay down differences before more is lost and nothing is gained. His novel is a fine tribute to humanity, to our frailties and our hopes, that we may overcome the violence which can completely destroy our lives.