“At the end of his fortune-telling the Rasputin next door apparently said this: “If you break out of this world you’ll find this world again, only one size larger. In your struggle with the world, the world has the advantage.”

Parade is a much more subtle novel than Villain. In fact, I was so shocked at the conclusion I found myself reading the last twenty pages twice, carefully looking for nuances which could have led to such a surprising revelation. The clues are all there of course, just not laid out in an obvious, 21st century American way.

Four Japanese students in their early twenties share Apartment 401 together in Tokyo. They are convinced that the inhabitant of Apartment 402 is up to no good, and they make elaborate plans to disclose his occupation. Yet they are completely unable to face their own flaws, let alone the tragic and horrifying flaw within the eldest. They look away from reality, and thus pardon one another’s behavior; if nothing is named, how can blame be assigned?

In the beginning of the novel I found myself longing for such a camaraderie, a group of friends who are able to live together so peacefully, so smoothly. They seem to co-exist without tension. Instead, they flow in and out of one another’s lives, asking innocuous questions like, “Where do you want to go for dinner?” “What movie do you want to rent tonight?” “Would you like to go out for a drink?”

By the end of the novel, we see what tragedy is created by the willingness to ignore truth. We see how probably, for these four anyway,  it will never change. If this is an indication of the mindset of today’s twenty-somethings, there is much to fear. 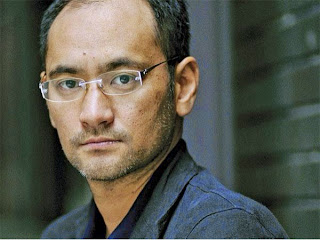 Shuichi Yoshida was born in Nagasaki, Japan, in 1968. The author of over 25 books, he has won numerous literary awards in Japan and has also had several of his short stories adapted for Japanese television. He lives in Tokyo.Read an excerpt from Parade here.

There’re too many people in the world like you,” Yoshio said. “Too many people who don’t have anyone they care about. Who think if they don’t love anyone else then they’re free to do whatever they want. They think they have nothing to lose, and that makes them stronger. If you have nothing to lose, there’s nothing you really want, either. You’re full of confidence, and look down on people who lose things, who want things, who are happy, or sad sometimes. But that’s not the way things are. And it’s just not right.

Let’s start with the Mitsuse Pass, shall we, as that’s the place Shuichi Yoshida began? He set us up right away with the perfect setting for his novel Villain. “Mitsuse Pass has always had ghostly, otherworldy stories connected to it. In the beginning of the Edo period it was rumored to be a hideout for robbers. In the mid-1920s rumor had it that someone murdered seven women in Kitagata township in Saga Prefecture and escaped to the pass. More recently the pass has become infamous as the place where, so the story goes, someone staying at a nearby inn went crazy and killed another guest. Aware of this tale, young people liked to dare each other to drive over the pass. There have been supposed sightings of ghosts as well, usually near the exit to the Mitsuse Tunnel on the border between Fukuoka and Saga.”

But, they don’t always drive over the pass in this novel. Sometimes they stop and take out their aggression on whomever has been lured to this misty, barren place.

Yoshino Ishibashi brags to her friends that she is seeing the rich and handsome Keigo Masuo. Nothing could be farther from the truth, but Yoshino likes to imagine that they are involved with each other. It impresses her friends, while making her feel important, even though Keigo has never once asked her for a date.

When she plans to meet Yuichi one night, who has driven hours over the pass to meet her, she stands him up when she catches a glimpse of Keigo coincidentally in the same park. She gets in the car with Keigo, drives off with him while chatting incessantly, and is apparently unaware of the pain she has caused in Yuichi. Because abandonment is the one thing he cannot stand.

His mother left him when he was small, telling him she’d be right back. “She abandoned Yuichi there at the ferry dock that day. He sat there, waiting, all alone, until the next morning. She said she was just going to buy their ticks, and ran away, but what she did was hide behind the pillars of the pier until morning. The next morning, when one of the ferry workers found him, Yuichi refused to budge. ‘My mom told me to wait here!’ he said, and actually bit the guy on the arm.”

Yuichi follows Keigo’s car with Yoshino inside, but all we know as readers is that Yoshino’s body was found in the morning. Such inexplicable loss for her parents. Such sorrow for Yuichi’s grandparents with whom he was living. Such bragging rights for Keigo. Such hope for Mitsuyo who, out of her desperate need for attachment, attaches herself to Yuichi believing that they are in love.

This atmospheric, and intricately woven, novel carries us over the passes we have traveled in our lives, both real and imaginary. It examines the roles of youth and old age, of parent and child, of lover and spouse. It tells a haunting story in which we wonder is a villain born or made, and is there any redemption for him or those who suffer at his hand?

I was completely enthralled in this novel; couldn’t wait to get my hands on it after reading Parrish’s review. It is my first novel for the Japanese Literature Challenge 5, and a most worthy one at that. Thank you, Parrish, for bringing it to my attention.

Author Shuichi Yoshida was born in Nagasaki, Japan, in 1968. The author of nine books, he has won numerous literary awards in Japan and has also had several of his short stories adapted for Japanese television. Villain won the Osaragi Jiro Prize and the Mainichi Publishing Culture Award, two prestigious Japanese prizes. Yoshida lives in Tokyo.