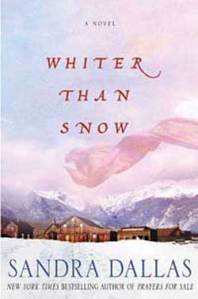 No one knew what triggered the Swandyke avalanche that began at exactly 4:10 p.m. on April 20, 1920…But who cared what the cause was? Something started the slide that roared down Jubilee Mountain in Swandyke, Colorado, and that was all that mattered.

There was a sharp crack like the sound of distant thunder, and then the cornice of snow where Dave Buck had thrown his bottle, a crusted strip two hundred feet long that flared out over the mountain ridge, fractured and fell. It landed on layers of snow that covered the mountain slope to a depth of more than six feet-a heavy, wet, melting mass of snow snow on top, falling on frozen layers of snowpack that lay on a bed of crumbled ice…

The miners called such a phenomenon a “slab avalanche” because a curtain of snow slid down the slope, picking up speed at a terrible rate, until it reached one hundred miles an hour. Nothing stood in the way of the terrifying slide, because the mountainside was bare of trees. They had been torn out forty years earlier in the second wave of mining that came after the prospectors abandoned gold pans and sluice boxes.   (p. 4-5)

Whiter Than Snow is the first book by Sandra Dallas that I have read, but what Ivan Doig did in his novel The Whistling Season, Sandra does here: she gives me a heartfelt connection to the story through believable characters about whom I truly care. From the very beginning, when I was first introduced to the avalanche, I knew that something terrible was going to happen; something involving parents, and their children, who became victims to a more powerful disaster than they had the ability to control. What I didn’t know is how meaningful these parents, and the way they dealt with their tragedy, would become.

Each chapter is a short story of sorts; while laying the background for the novel’s tumultuous climax, we are introduced to the characters one by one. From the grandfather who failed to save his friend when the Sultana sank during the Civil War, to the story of a Jewish girl who ran off with the man her parents forbid her to marry, to the father of the only black child in the elementary school, we find a myriad of people who all have a different story to tell. Each one of them had at least one child in the path of the avalanche on that fateful day. Some of the children survived, others didn’t.

But, that isn’t the whole story. The rest of the story is what happens to those whose paths have met on that Colorado mountain, by the Fourth of July mine. How do they heal? How do they help each other manage this terrible tragedy, of the children’s deaths and the pain that they suffered before the children were even born?

As I ponder the verse that Sandra gave in the flyleaf (Psalm 51:7) I realize that the snow was a cleansing force. Sure, it wreaked a path of destruction. But, after the purging, if you will, there was such a renewal, such an absolution from their past, that the characters seized their new lives and therefore healed their wounds.

Thank you to The Book Report Network and St. Martin’s Press for the opportunity to read and review this spectacular book. Find other thoughts on Whiter than Snow from Staci, Diane, Becca and Booklogged.