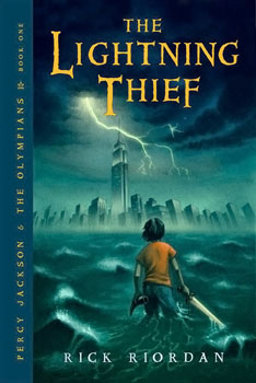 The kids in my third grade class begged me to read me The Lightning Thief. One of the mothers actually bought it for me this Christmas. Reading for the Read-a-Myth Challenge and the Once Upon a Time Challenge 5 pushed me over the edge to read it aloud.

You’ve got to love Percy Jackson, our middle-school aged hero. He’s got ADD, the typical angst of adolescence, and untypical parentage by having a human mother and Poseidon for his father. He’s also got a quest:

You shall go west, and face the god who has turned.
You shall find what was stolen, and see it safely returned.
You shall be betrayed by one who calls you a friend.
And you shall fail to save what matters most, in the end.

I enjoyed his story. But what I most enjoyed about the story where the elements of mythology I was able to teach my class, from the famous brothers Poseidon, Zeus and Hades who descended from their father Cronus, to the war god Ares and Hade’s Helm of Darkness. The kids were entranced, as you can from a few of their reviews below:

However, not everyone in my class liked it. Here’s one more:

So, I guess you’ll have to read it yourself to find your own verdict. And after you do, there’s a trivia game with ten questions to play and test your reading skills.

I know that most of my class will be reading the rest of the series over the summer, and that’s a good thing.