For a Science Fiction book written 66 years ago, Fahrenheit 451 has an astonishing amount of relevance for today. The people do not have living rooms, they have TV parlors, where they are inundated with sound to such an extent that they cannot converse, or think, or imagine for themselves. Their ears are stopped up with tiny Seashells streaming constant noise; their eyes are blank, reflecting what lies behind them: emptiness.

This book reminds me of The Stepford Wives, where women were controlled by their husbands, only this time the people are controlled by the government. It is a government which lies, and covers up to hides its mistakes, all in order to save face just as Hillary Clinton still does today regarding Benghazi. People believe what they are told to believe because they are not able to think for themselves.

Guy Montag decides he will not burn books any longer. Instead, he turns liquid fire on Captain Beatty, and then manages to escape the Mechanical Hound which is set to seek and destroy him. He finds a ragged group of men around their own campfire, a fire from which surely a Phoenix will rise, for these men know that together they are stronger than individuals who can merely rage. They have taken it upon themselves to memorize the written word, from Thoreau’s Walden to the Magna Carta, the Constitution, and Ecclesiastes.

A warning comes from Granger, which we would do well to heed:

“And hold onto one thought: You’re not important. You’re not anything. Some day the load we’re carrying with us may help someone. But even when we had the books on hand, a long time ago, we didn’t use what we got out of them. We went right on insulting the dead. We went right on spitting in the graves of all the poor ones who died before us. We’re going to meet a lot of lonely people in the next week and the next month and the next year. And when they ask us what we’re doing, you can say, We’re remembering. That’s where we’ll win out in the long run. And some day we’ll remember so much that we’ll build the biggest goddam steamshovel in history and dig the biggest grave of all time and shove war in and cover it up. Come on now, we’re going to go build a mirror factory first and put out nothing but mirrors for the next year and take a long look in them.”

I can’t imagine a better time to look in the mirror than right now. 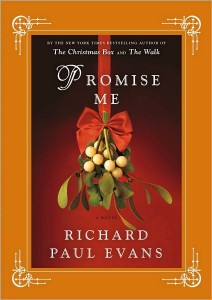 I wanted to like this book. I really did. But, maybe it was a mistake to go from Boris Pasternak to Richard Paul Evans. Or, maybe I’m just not able to appreciate romance of the more popular kind.

While the writing was awful (it sounded like a high school student’s in an Advanced Creative Writing class), I held some hope for the premise; however that, too, quickly evaporated.

Beth Cardall’s daughter, dying of cancer, makes her husband promise that he will take care of her mother. This is a promise which he keeps. However, when he entered her life, I wasn’t sure if he was an angel or a stalker. The truth behind Matthew’s mission surprised me.

There were several holes in the story, seemingly contrived for the benefit of the plot. But, if I point them out, it will spoil the secret behind Matthew. It will spoil whatever parts of the book I haven’t spoiled already.

So sorry, this book did not work for me.