When I read the essays on Paris which are included in Paris Was Ours, I am struck by the courage these writers had to pick up and go. Some of them would not call it courage; they would label their action as foolish, or impulsive. But I think that anyone who has a dream, and makes it a reality, is very brave. Especially when it calls for changing one’s environment. Language. Culture.

It is clear that Paris cannot be an easy city in which to live. Beautiful, yes. But, also expensive. And, unwelcoming. (“Or, politely put, they are born cynics who lack an Anglo-Saxon’s curiosity about strangers.” Natasha Fraser-Cavassoni) These writers tell of their experiences with handling money, with finding an apartment which cost twice what a two-bedroom apartment in a building with at doorman in Brooklyn cost. They talk about fashion, how the French women are the size of their teenage daughters, mostly because the portion of their meals is small, not the fat content. French women are quintessentially chic women, who buy two or three expensive things (think Chanel) a year, wrap a scarf around their necks, and are set to go for any occasion.

The writers of these essays come from varied places in life. Some are students, some are writers. Some are in the fashion industry, others are bankers. One is homeless, another is an apprentice chef. They all write of their unique experiences in The City of Light.

One of my favorite essays in the collection is titled, “My Bookstore High” by Jeremy Mercer. Of all the times I have been to Paris, I have neglected to visit Shakespeare and Company. (Perhaps I had a misplaced importance on finding Guerlain parfumeries, or the cafe Deux Magots.) Jeremy found here a sanctuary for a poor writer with no bed of his own: 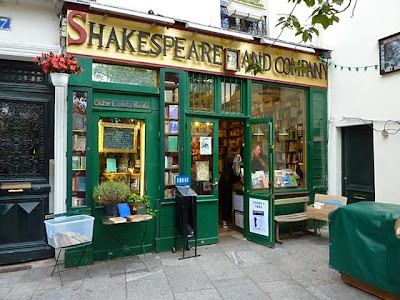 From what Eve had told me, George welcomed lost souls and poor writers. I qualified on both counts. Considering the precious little money in my pockets, and the scarcity of options before me, it didn’t take long to decide that fate had brought me to Shakespeare and Company that rainy Sunday afternoon. For the first time since the threatening phone call. I began imagining a future. I would write a brilliant novel at the bookstore..” ~Jeremy Mercer

And now to record some of the quotes I highlighted while reading, for they struck me as especially pertinent to my own experiences of Parisian life:

“Parisian standards are high, even unforgiving. They’re also double edged, explaining at once why the city’s inhabitants look as good as they do, seem as cold as they can be, and have accomplished so much in art, music, literature and more. There’s a taut discipline beneath their seemingly effortless finesse, their knack for displaying almost anything–whether it’s a plate of moules, a bouquet of wildflowers, or their own physical selves–to advantage.” ~Penelope Rowlands

“In Paris, before possessing an object of desire, one tries to covet it as long as one can.”~Veronique Vienne

“C’est comme ca. More than its literal translation (“It’s like that”), this phrase is best rendered as “That’s just how it is.” ~Caroline Weber

“I had never been in a place where there was so much to observe: the benches, the wrought-iron balconies, the long cars that looked like bugs, the policemen with their huge caps, the food sold outdoors, bookstalls outside along the river. Everywhere I went, there was a new tableau to take in.” ~Alice Kaplan

“Children in France are seen but not heard,” says one American friend, Katherine, who is a mother of two. “Except on the playground, where the parents don’t get involved and then it becomes Lord of The Flies.” ~Janine di Giovanni

“I was someone who was wrapping a paring knife bought at Dehillerin in an apron and placing it in my suitcase. But more than that, I felt like a Parisian cook. Surviving in the crucibles of the city’s kitchens gave me the confidence to face what awaited me.” ~Patrick Kuh

“Work was seen as an essential component of modern motherhood, a component of good motherhood, in fact, because it was something that helped women feel happy and whole. Particularly odd was how readily my American peers accepted all their stress and guilt as a natural consequence of motherhood. It didn’t seem to dawn on anyone that there could be another way.” ~Judith Warner

These brief quotes give you an idea of what is found in this collection, a collection which as closely approximates actually living there as I have read.