I’ve been waiting for this book all summer. I didn’t know it, of course, while I was wading through heavy tomes by Eric Metaxes, Fyodor Dostoevsky, and Salman Rushdie. Thick as the air I’ve been breathing this month, they are worthy books in their own right. But, June has been a month of drudgery for me, not a month of reading something exceedingly slowly so as to savor every word.

You can’t imagine what a breath of fresh air this book is. It is charming, and fascinating, and speaks to my heart as if Pauls and I have long been friends. He writes of what I know, from Evel Knieval’s stunts to feeling like a stranger in this world. He writes with a wit and a tenderness which had me smiling, or blinking away a tear, from one page to the next.

Let’s start with this quote: “See: I think Tolstoy was wrong. Unhappy families are all alike. They’re all alike in this moment-in this pause before something happens, in the pause before someone reacts. And that pause: It can last seconds or minutes or days or months or years.” We have an unhappy family here. Amy Clark and her son Khosi Saqr are happy together; the discordant note comes from Khosi’s father. A man with an addiction to gambling, he left her with huge debts to be paid by her family. He left their son with no father to remember.

Now Khosi is an endearing young man who is twenty years of age. He is obsessive-compulsive, but in a way that makes sense to a person who relishes control: lining up his pencils in ascending order, or hanging up his shirts according to color family. He likes order, he needs order, but by the end of the novel he comes to realize that order does not save anyone. “It’s such a heinous cliche: Life is fragile. But in America, our entire lives seem to be set up around denying this fact, this utterly undeniable thing. We are breaking, decaying bodies: we are fallible, imperfect machines. We cannot order our lives: order fails. Order always fails. It is undone by something as tiny as Aedes aegypti, a creature whose body weighs a fraction of a gram.”

When Khosi sees his father in his hometown of Butte, Montana, one day, he decides he must follow him to Cairo, Egypt. He must discover who is father is, he must discover the story which lies beyond the boundaries of his mother’s penchant for Egyptian cooking. “What’s it like to be the child of an immigrant? I know and I don’t know, both. I have a family tree somewhere, but I don’t know where, and it’s probably in Arabic, or possibly French, or possibly both. The past, the history of my family, is a strange and hybrid beast. On the one side: exhaustively documented. I live and work in its midst. But on the other side: nothing. No body, no clothes, no cane, no toupee, no set of dentures, no artifacts whatsoever. Only a vocabulary that vanishes as soon as it’s fashioned into language. Only the vocabulary of exile and disappearance.”

What Khosi discovers in Egypt is his father’s life about which he had no knowledge, deadly looking knives and mosquito-borne diseases. But, he also discovers compassion, forgiveness and a tunnel of sorts which goes from America to Africa. A “tunnel” capable of uniting a family in its own unique way.

A huge thank you to Crown Publishers, who not only sent me Evel Knieval Days, but has offered to send one to you. Simply leave your name and email if you wish to be considered for a copy. I will declare the winner at the end of July. If you can’t wait that long, Evel Knieval Days will be published July 17, 2012. 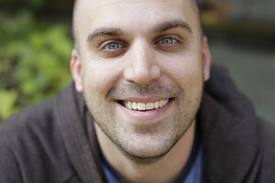 PAULS TOUTONGHI is the Pushcart Prize–winning author of the acclaimed novel Red Weather. He was born in Seattle, Washington, to an Egyptian father and a Latvian mother. His work has appeared in the New York Times, VQR,Sports Illustrated, Zoetrope, Glimmer Train, the Harvard Review, and One Story, as well as online for Salon, The Rumpus, Bookslut, The Millions, and elsewhere. He is the father of twins and teaches at Lewis & Clark College in Portland, Oregon.