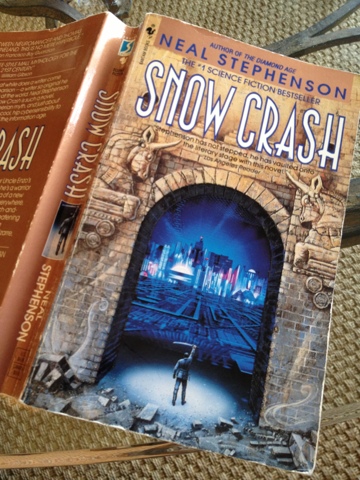 There isn’t anything that Neal Stephenson doesn’t use in his novel to poke fun of a futuristic society which doesn’t seem far removed from the America I’m living in today.

We’ve got a teenage girl named Y.T. who is a Kourier, riding a plank (skateboard) and pooning (harpooning) cars in traffic to catch a ride.

We’ve got Hiro Protagonist, part Japanese and part African American, with two crossed swords as his weapons of choice, who lives in a U-Stor-It unit in reality, but is a warrior in the Metaverse into which he can goggle in through his computer.

We’ve got a religious cult with a leader named Rife, a drug known as Snow Crash, and a mafia group run by Uncle Enzo.

We’ve got the Aleutian named Raven, who is not only immensely powerful physically, but has made knives out of glass sharper than any made of steel.

We’ve even got vehicles as mundane as those annoying minivans so popular in the burbs that Stephenson has named them “bimbo boxes”.

This is an action packed Sci-fi novel which leaves no major theme untouched: war, weapons, language, religion, politics, and power. It’s done at the hand of the master, Neal Stephenson, who has us glued to our seats as if we were watching the whole thing unfold on a massive screen before us.

I read it for Carl’s Once Upon a Time Challenge VII, as well as for the Times’ list of 100 best books written since 1923. Snow Crash was nominated for both the British Science Fiction Award in 1993, and the Arthur C. Clarke Award in 1994.