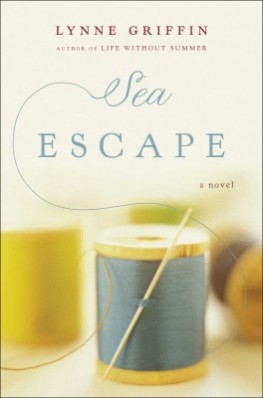 Seven months after I’d attached myself to Candy, my father died, and my mother was no longer satisfied to spend her afternoons with two young girls. She had trouble carving out time even for me. Instead she’d plant herself in the wing chair by the bank of windows overlooking the sea and spend her days with him, reading the love letters over and over. Letters she never let me read. And that was the beginning of me not being enough for her. (p. 35)

Laura Martinez, nee McIntyre, is a woman that many of us can relate to: mother, wife, daughter, working professional who balances her roles with alacrity and grace. Most of the time. Yet while her home may reflect a bit of chaos (the occasional misplaced shoe, the counter covered with breakfast dishes, the mad scramble not to miss the schoolbus) it is far more real than the illusion of perfection which her mother worked to create in her home, Sea Escape.

Her mother forbids sandy shoes to cross the threshold, loud voices to resonate the hallways, and dirty fingers to touch pristine material. Her mother sits, removed from others, in the grief she bears following Laura’s father’s death. Her mother reads his letters over and over, revelling in her love for him while imprisoning others in her dream of the perfect family.

Who has a perfect family? Who? No one I know. And the families which insist they are, often turn out to be the ones which are most deeply flawed.

I thoroughly enjoyed this novel, which revealed layer upon layer of emotion as well as secrecy. I love how it explored mother/daughter relationships, mother/child relationships, and husband/wife relationships. I love the way that Laura came to terms with her life at the novel’s conclusion.

“People change, Laura. The Grace of God softens hard hearts, making them capable of hearing the truth. I’ve known your mother a long time. It’s true she’s not the woman she once was. In the midst of her great suffering, she’s changed, not just in physical ways for the worse, but in soul-searching ways for the better. Her body may be weak, but her transcendent heart is strong.” (p. 244)

I have one copy of Sea Escape, as well as Life Without Summer, to give away to a reader who lives in the U.S. or Canada. Sea Escape was recently an Indie Next List Notable pick, and it was also picked by Entertainment Weekly as one of the ten must read books of summer. Visit Lynn Griffen’s page for more information about each novel, and simply leave a comment to be considered for a winner.

Thanks to TLC Book Tours, along with Simon and Schuster, for the opportunity to review this book. Find more information, and links to reviews, here.