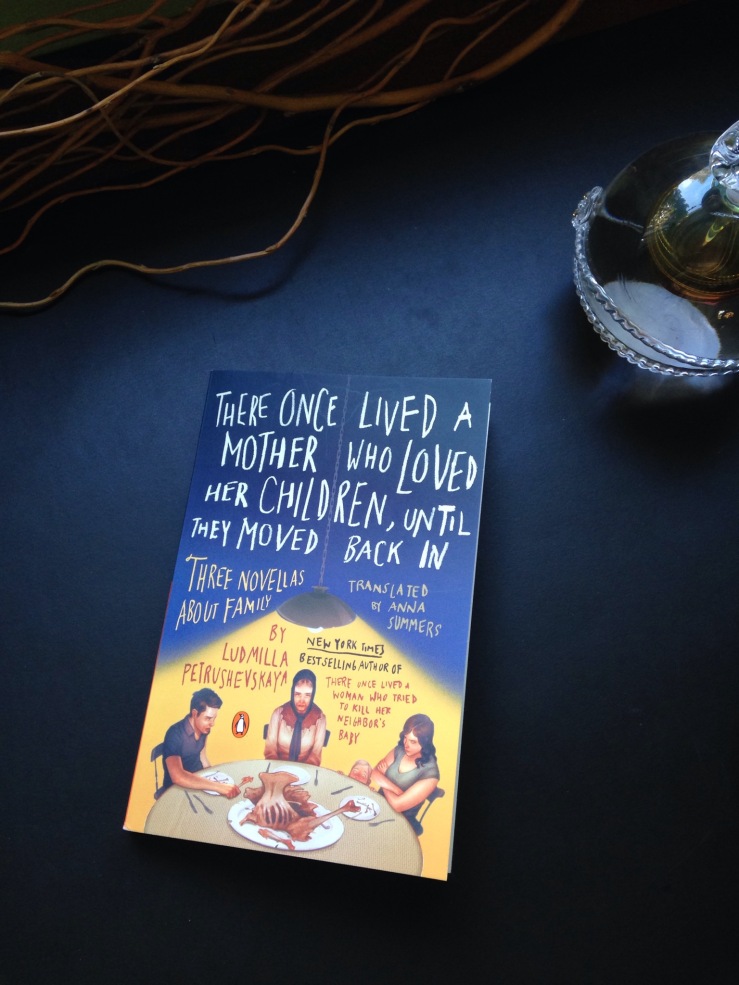 I used to glorify Russia, having never visited there. But I pictured the snow in sparkling white crystals, with troikas skimming over the surface, as if Russia was a fairy land made of ice palaces rather than a prison made of rooms so poorly heated a family of four cannot stay warm within the walls.

Ludmilla Petrushevskaya gives me a more accurate picture of Russia. A picture so bleak and hopeless I am grateful for every bad day I’ve ever had. Because all of them together could not equate with the life she has portrayed for the mother, also a poet, in her novella, Time is Night.

This mother’s own mother has schizophrenia. She has been admitted to a psychiatric hospital where at least she can receive a modicum of care. For the woman of the house has all she can do to manage her drunken son Andrey, freshly released from prison; her daughter, Alena, pregnant with her third child and no husband; her grandson, Tima, who counts on her for his daily existence yet lets her slide into the background when his mother appears at the door.

How can a simple apartment hold so many people? How can a poet’s salary provide enough food or money for the rent? How can a family survive under such conditions, and forgive me, such stupidity? For I know not how a woman can become pregnant over and over without a husband or a job. I know not how a son can rob from his mother when it is possible to live honorably. Maybe it is easy for me to say, as I have suffered under neither poverty nor such a hopeless existence.

This sentence, cried out by the mother as she is begging the ambulance driver to take her and her mother home, illuminates much:

On the other hand, if they get rid of me quickly, they can get a nice easy assignment: a family hacked to pieces by a drunken husband, for example.

This book comprised of three novellas is absolutely piercing. The description of horrors each family lives under is balanced by the writing of a humane and compassionate heart. It is no wonder that the novellas in There Once Lived A Woman Who Loved Her Children Until They Moved Back In have earned Ludmilla Petrushevskaya the recognition of being one of Russia’s best living writers. Her writing contributes much to my understanding of life in Russia, of lives led in a quiet desperation. This book has touched me deeply.

Praise from other sources:

“An important writer . . . Russia’s best-known . . . She’s a much better storyteller than her American counterparts in the seedy surreal. . . . Petrushevskaya’s stories should remind her readers of our own follies, illusions and tenderness.”
—Chicago Tribune

“Her suspenseful writing calls to mind the creepiness of Poe and the psychological acuity (and sly irony) of Chekhov.”
—More

[Petrushevskaya] is hailed as one of Rus­sia’s best living writers. This slim volume shows why. Again and again, in surprisingly few words, her witchy magic foments an unsettling brew of conscience and consequences.”
—The New York Times Book Review

“Anything but dull, the stories twist and peak in odd places. They create nooks in which the reader can sit and think: What does this mean?”
—Los Angeles Times