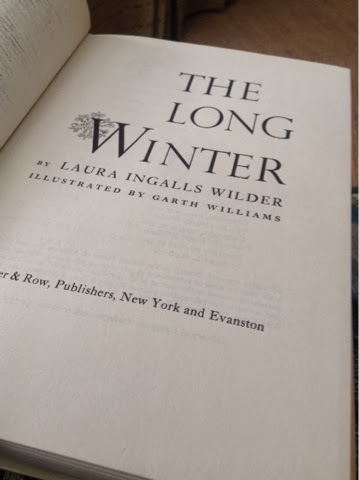 “If only I had some grease I could fix some kind of light,” Ma considered. “We didn’t lack for light when I was a girl before this newfangled kerosene was ever heard of.”

That’s so,” said Pa. “These times are too progressive. Everything has changed too fast. Railroads and telegraph and kerosene and coal stoves–they’re good things to have but the trouble is, folks get to depend on ’em.”

I never tire of Laura Ingalls Wilder’s books no matter how many times I’ve read them, which at this point in my life is many. It seemed like a good time to pull down The Long Winter, one of my favorites in the series, and I’ve been reading it all evening.

When I was little, in the 60’s, I would read these books and long to live “back then.” Always a sucker for the nostalgic, Laura’s days seemed more full of glory than grit. But, I would wonder, “If I were to write of my life, how could it ever seem old?”

Now I tell my children of my childhood, when the televisions were black and white with only four channels: NBC, ABC, CBS, WGN and if we were lucky, PBS. My mother woke us up in the middle of the night, after warming up the TV, so that we could watch Neil Armstrong take his first step on the moon in 1969.

The telephones had real operators at the other end, people who could connect you to the person with whom you wanted to speak so that you didn’t even need to dial the phone. It was a glorious day when wall phones with push buttons were installed, the cord so long that my mother could move about the kitchen while talking to my aunt never caring one bit when the rubber caught on fire from being suspended over the stove for too long.

There were no XBoxes, video games, iPhones or iPods. There were doll houses for which I sewed sheets and curtains. There were watercolours with which to paint like Beatrix Potter. There were books to bring home from the library every week. Books which filled my life then as powerfully as they do now.

But, I can relate to Pa’s lament up above. Folks get to depend on the conveniences they have, and with that ease comes less independence. Less ability to do without. I wonder how it would be now, to drive somewhere with a paper map, without a phone in case I broke down. I can hardly remember how I drove Germany’s autobahn in the early 80’s, not speaking a word of German, praying, “Lord! Direct me, because I have no idea at which sign I must exit.”

It’s all relative, I suppose, how much technology effects us. How much it may, in fact, keep us from relying on ourselves.

I grabbed my old copy of These Happy Golden Years last night when the Re-readathon begin. I cast aside the John Crowley’s Little, Big which I’d been reading to re-enter the days of my childhood, and long after my husband went to bed I sat reading until the book was finished.
As everyone who’s read of the Little House books knows, Laura became a teacher when she was only fifteen years old. Her first experience at the Brewster School twelve miles from her home could have daunted her so much that she never taught again. But, her second assignment at the Perry School required her to teach only three pupils in a brand new building.

In the last days of March the Perry boys painted it white. There never had been a prettier, small schoolhouse.
It stood snowy white on the green land, and its rows of windows shone brightly in the morning sunshine as Laura walked toward it across the short, new grass.
Little Clyde Perry, seven years old, was playing by the doorstep where his First Reader had been carefully laid. He put the key of the new door into Laura’s hand and said solemnly, “My father sent you this.”
Inside, too, the schoolhouse was bright and shining. The walls of new lumber were clean and smelled fresh. Sunshine streamed in from the eastern windows. Across the whole end of the room was a clean, new blackboard. Before it stood the teacher’s desk, a boughten desk, smoothly varnished. It gleamed honey-colored in the sunlight, and on its flat top lay a large Webster’s Unabridged Dictionary.
A small clock stood ticking beside the big dictionary; its hands stood at nine o’clock. It must have been wound last night, Laura thought. Nothing could be more complete and perfect than this beautiful little schoolhouse. (p.150-151)

Now, I have never taught only three pupils. I have never taught in a one room schoolhouse. I have never had a little clock ticking on my desk with a Webster’s Unabridged Dictionary right beside it. But surely somewhere, in the corners of my mind when I decided I would be a teacher, these words resonated with me. For I knew I wanted to teach when I was eight years old. Twenty eight years of teaching later, I feel certain that the stories of other’s lives effected me and my decisions.
Have you had a similar experience? Can you think of a book which so effected your life it quite possibly took you down the very path you now tread? Tell me. And perhaps you’d like to reread it this Re-readathon weekend, too.