I’d had my eye on him ever since his books started hitting the shelves. Half of me was proud that my childhood friend had made it, while the other half was envious of his success. We’d often talked about becoming writers when we were kids. We both loved books and were constantly recommending our favorites to each other, reading and swapping them when we were finished. Hidaka turned me on to Sherlock Holmes and Arsene Lupin. In return, I gave him Jules Verne. (p. 146)

Several fellow bloggers on Twitter have mentioned that Malice is one of their favorite books by Keigo Higashino. While my personal favorite of his, so far, is Naoko, I have thoroughly enjoyed the puzzle within Malice.

The story revolves around a famous author, Kunihiko Hidaka, who is found brutally murdered in his apartment the night before he is to move to Vancouver. His best friend, Osamu Nonoguchi, is interviewed with surprising revelations.

Keigo Higashino takes us back to elementary school, in fact, to the very prejudices we are brought up with as children. Through a series of interviews and analysis from police detective Kyochiro Kaga, a former classmate of Osama Nonuguchi’s, we come to the startling truth. It is a revelation of the power of malice, long coddled in a child’s heart.

About the author: Keigo Higashino is the bestselling and most widely read novelist in Japan, as well as several other Asian countries, with hundred of millions of his books sold worldwide. His work has been adapted for dozens of television series and films in several countries and languages. He won the Naoki Prize for The Devotion of Suspect X, the first novel featuring his character Detective Galileo, and the English translation was a finalist for the Edgar Award for the Best Novel and the Barry Award. He lives in Tokyo, Japan.

“From a cup of coffee what dreams may bloom…”

I have just finished Keigo Higashino’s Salvation of a Saint, the first book of September to have caught my interest sufficiently to see it to the end. It is a fabulous mystery, exactly the kind of book which keeps you reading until you are done.

When Ayane’s husband is found dead on the floor of their home, with the contents of a cup of coffee spilled around him, we are immediately brought to the awareness that this cup of coffee was his demise.

But how? His wife, Ayane, was visiting her parents a train ride away. His new mistress had just left after a late night tryst. So who plotted such an ingenious plan which would kill a man from afar, through his own desire for a perfect cup of coffee? And most of all, why?

I was riveted to the exploration of the characters’ personalities and pasts; the things they held on to that made them act a certain way in the present. Discovering their flaws made discovering the intricacies of the mystery all the more fascinating.

I read this book for the Japanese Literature Challenge 8, and for Aarti’s A More Diverse Universe. It is the second book I’ve read by Keigo Higashino, an author who “is currently the most widely read author in Japan, with more than three dozen best sellers, hundreds of millions of copies of his books sold worldwide and nearly twenty films and television series based on his work. He won the Naoki Prize for The Devotion of Suspect X“…which is the next book of his I want to read. 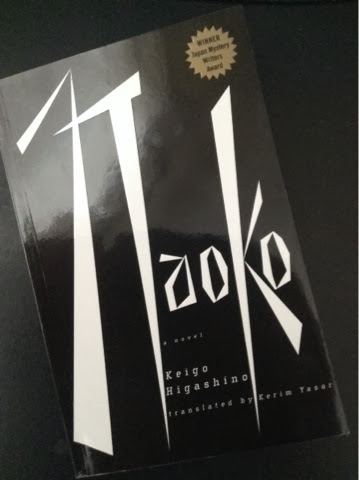 “Everything has an end. The day of that accident should have been the end for me. All that happened was that the end was put off until today.” Then she added quietly, “You’re the one who made that possible for me.” (p. 274)

When Heisuke Sugita comes home from work one night, and idly turns on the television while he eats his supper, he is totally unprepared for the scene which faces him. It is of a snow-covered mountain, shot from a helicopter, with the voice of a man giving a report that a terrible bus accident has occurred. Indeed, Heisuke’s wife and daughter were in the accident which killed many passengers.

At Nagano Central Hospital, Heisuke learns that his wife, Naoko, was killed. Because Naoko covered their daughter with her body, Monami survived. However, it is not Monami who exists within her body. Apparently Naoko has taken over Monami’s body in a case of metempsychosis: “reincarnation; the supposed passage of somebody’s soul after death into the body of another person or animal.”

The novel is brilliantly told from the point of view of Heisuke who must face living with his wife in an eleven year old’s body. Despite the adjustments which must be made in their lifestyle, not the least of which is sexual, Heisuke is happy because at least is wife is still with him in spirit.

But, complications arise as she becomes older. At sixteen years of age, Monami’s body is quite beautiful. She is popular at school, and much sought after by her peers. She is very bright and hardworking, and Naoko decides that their daughter must carry on her education to the highest levels. When Heisuke discovers a change in their phone bill, and hears Naoko carrying on conversations with a handsome young man when she supposes he is in the bath, he becomes insanely jealous of the life that Naoko is now leading.

It is obvious that Naoko is enjoying the attention, beauty and opportunity that she now has as a teenager. So, is this a case of reincarnation? Multiple personality disorder? Or, something far more sinister?

Just as I would expect from a Japanese novel, this is not a mystery in the sense of a “whodunit”. This is a mystery of epic proportions, a mind bending story on many levels, examining what it is to be a husband and father, a wife and a mother. At the same time, how much does our outside appearance determine who we are on the inside and vice versa?

Naoko is a novel I will be thinking about for quite some time, a perfect psychologically twisting story which Keigo Higashino is so adept at writing.