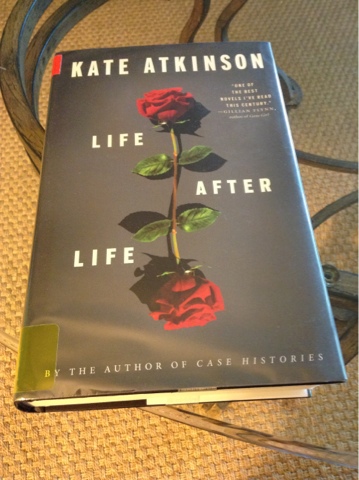 “The Adventure of Augustus,” Teddy read aloud, “by Delphie Fox.”
“Why is everything an adventure with you?” Sylvie said irritably to Izzie.
“Because life is an adventure, of course.”
“I would say it was more of an endurance race,” Sylvie said. “Or an obstacle course.”
“Oh, my dear,” Hugh said, suddenly solicitous, “not that bad, surely?” p. 181

What if Ursula didn’t die at birth when the cord was wrapped around her neck, but went on to live a full life? What if she was able to fend off her brother’s friend at age 16, and thereby avoid rape and subsequent pregnancy? What if she never married Derek and wasn’t an abused wife? What if the bombs that fell during WWII didn’t crush her in the basement of her tenement building? What if Crighton didn’t leave her, but instead left his wife and asked her to marry him?
The scenarios of Ursula’s life, set in the context of England’s history beginning with the 1920’s, are played out over and over again. She dies, and then we go back in time to the beginning of that particular point and play out a different set of events. It reminds me of the children in school who, when faced with a disastrous outcome, shout, “Do over!” Because who doesn’t fantasize about the chance to go back and do things differently? Who hasn’t thought back over life while pondering the question, “What if…?”
What a tremendously imaginative and engaging book this is, unlike any kind of “time travel” I’ve read before. The only danger lies in dwelling on one’s regrets, while knowing in real life we cannot change a thing.

“Sometimes it was harder to change the past than it was the future.” (p. 495)