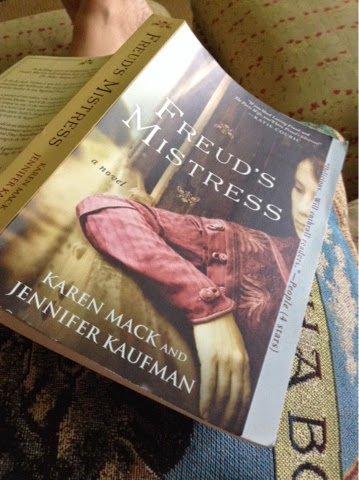 “Guilt is simply self-imposed punishment thrust on us by civilization. Isn’t that what you said?

You can justify everything, can’t you?”

“Sexual needs are rights, and no one should be expected to live without gratifying them,” he said, putting down his cigar.

“So it’s simply a philosophical and academic question.”

“If you want to look at it that way. It’s the truth. Guilt is imposed by society to stop us from loving who we want to love. Don’t you want to be with me?” he asked, his eyes softening.

When my professors at Wittenberg University taught me about Sigmund Freud, they spoke all about his theories: the id, the ego and the superego vying for attention; neurosis which could be absolved by “the talking cure”; the analysis of dreams to uncover one’s repressions; everything about our psyche having its root in sexuality. But never, in all the course of earning a B.A. in Psychology, did any one discuss the fact, or even the supposition, that Freud slept with his sister-in-law.
How fascinating then to read of Minna Bernays, a woman in her early thirties who was swept away by Freud’s charms. Totally unfulfilled in her life as a governess, she came to the Freud’s house with no where to go and was heartily welcomed in. What a wonderful help she could be to her sister, Martha, who was exhausted by the care six children required. What an interesting woman she was for Sigmund to charm.
Despite her intentions to stay away from him, she eventually succumbs to his advances and their mutual desire. This novel is their story.
Freud’s Mistress reminds me in so many ways of Loving Frank and The Paris Wife. All three novels are riveting in the way they capture illicit love affairs and the havoc they wreak on those around them. All three of them bring the central male, be it Frank Lloyd Wright, Ernest Hemingway, or Sigmund Freud, to a light that not many professors are willing to reveal. And their poor women…like I did for Anna Karenina or Madame Bovary, my heart leapt at their vulnerability. If only they had had the strength to withstand those amorous advances, so much pain could have been spared.
I read Freud’s Mistress in one day. It was a captivating read for anyone interested in historical fiction, the life of Sigmund Freud, or the effects of love affairs with married men. I loved it for all three.