The Shape of The Ruins is a novel of historical fiction which dwells on many themes: the past, coincidence, conspiracy, how mistaken we might be about what we are told is factual. What if the Twin Towers in New York did not fall just because two planes crashed into them? What if John F. Kennedy was not shot by Lee Harvey Oswald alone? And, what if Jorge Eliecer Gaitán, the Liberal leader of Bogata, was also part of a nefarious plan when he was assassinated on April 9, 1948?

I like how Juan Gabriel Vasquez highlights pieces of American history and parallels them with that of Colombia’s, in terms of possible deception to the people. He presents governments who, at the very least, have distorted or omitted facts for their own political agenda. And, he presents himself as an author within this book, for authors have the freedom to interpret what happened in the past.

And nevertheless, that was the only thing that interested me as a reader of novels: the exploration of that other reality, not the reality of what really happened, not the novelized reproduction of true and provable events, but the realm of possibility, of speculations, or the meddling the novelist can do in places forbidden to the journalist or historian. (p. 181)

Juan Gabriel Vasquez gives us many interpretations of what the past can mean, this being one which particularly stands out to me:

That’s what the past is: a tale, a tale constructed over another tale, an artifice of verbs and nouns where we might be able to capture human pain, fear of death and eagerness to live, homesickness while battling in the trenches, worry for the soldier who has gone into the fields of Flanders and who might already be dead when we remember him. (p. 224)

The plot within these pages is quite involved. It is detailed, in some places, to the point of being tedious. (Especially the section from page 290-390 which describes the murder of General Rafael Uribe Uribe.) Facts, as we know them, have been intertwined with the author’s conjecture, portraying a country’s history as tenuous at best.

I don’t know when I started to realize that my country’s past was incomprehensible and obscure to me, a real shadowy terrain, nor can I remember the precise moment when all that I’d believed so trustworthy and predictable—-the place where I’d grown up, whose language I speak and customs I know, the place whose past I was taught in school and in university, whose present I have become accustomed to interpreting and pretending I understand—-began to turn into a place of shadows out of which jumped horrible creatures as soon as we dropped our guard. (p. 441)

The last section of the book pulls me in with sentences like that. I remember being a child who believed that teachers taught you, doctors healed you, and leaders led you. Now that I am grown up, I, too, see the shadows all around me, and for that reason I think The Shape of The Ruins has an impact far beyond its pages. Far beyond Colombia or America. Perhaps all of us can find a certain disillusionment in what we thought to be true about our country. 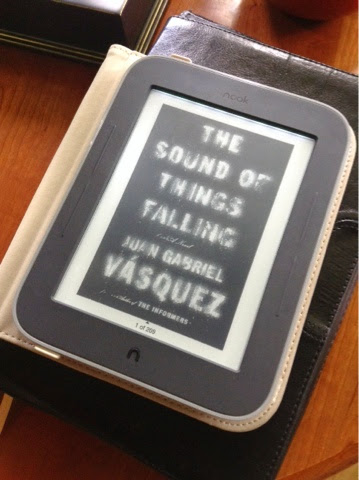 There is a sound that I cannot or have never been able to identify: a sound that’s not human or is more than human, the sound of lives being extinguished but also the sound of material things breaking. It’s the sound of things falling from on high, an uninterrupted and somehow also eternal sound, a sound that didn’t ever end, that kept ringing in my head from that very afternoon and still shows no sign of wanting to leave it, that is forever suspended in my memory, hanging in it like a towel on a hook.

So many things fall. Our bodies. Objects from the sky like planes and the black boxes they contain. The dreams we have for our lives and with whom we’ll spend them. Once gone, will anyone take the time to look for us? Will anyone take the time to discover our stories, or stay with us once they are revealed?
Antonio Yammara’s life crossed with Ricardo Laverde’s while they were playing at a billiards club in Bogota. A friendship of sorts, or at least a relentless curiosity on the part of Antonio, compelled him to unravel the mysteries of Laverde’s life. Especially after Laverde is shot on the sidewalk one day, and Antonio is struck by a bullet alongside him. When Antonio recovers enough to walk, he pursues the clues which he hopes will reveal the reason why Laverde claims he was a pilot, why Laverde was crying while listening to a BASF cassette, why Laverde mourns a woman he calls Elena.
Parallel wih Laverde’s life is Antonio’s. They both have little girls. They both have lovely women. They both have lives filled with complicated choices and results not of their choosing.
Their story takes us throughout Columbia, to the early 1970’s and back again. It contains reminders of the Vietnam War in the States, when Nixon was our President, and the Peace Corp was a viable alternative to fighting. It brings to the forefront Columbia’s drug traffic history by recalling Pablo Escobar and his famous property, Hacienda Napoles.
I read The Sound of Things Falling for Spanish Lit Month. I read it because it most recently won the Dublin IMPAC Award. But I will long remember it for the beautiful writing (“…her face was like a party that everyone had left”), the tender story it leaves behind, and the observations on life in general.

Adulthood brings with it the pernicious illusion of control, and perhaps even depends on it. I mean that mirage of dominion over our own life that allows us to feel like adults, for we associate maturity with autonomy, the sovereign right to determine what is going to happen to us next. Disillusion comes sooner or later, but it always comes, it doesn’t miss an appointment, it never has. 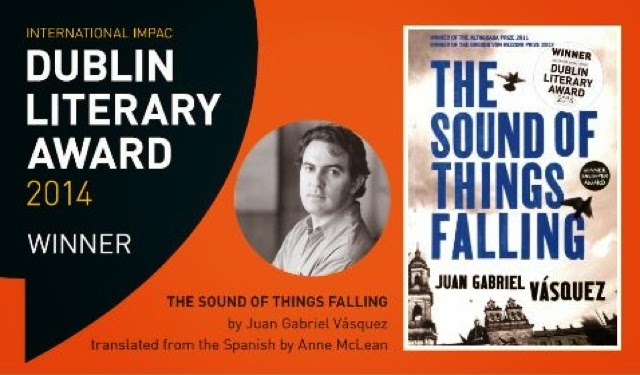 Vásquez was a finalist for the Independent Foreign Fiction Prize in the UK with The Sound of Things Falling. His work has been translated into English, French and Polish. He won the Qwerty Prize for best book of fiction in the Spanish language and the Foundation Books & Letters Award for best book of fiction. He also received the 2011 Alfaguara Award and the Roger Caillois prize in 2012.
Loading Comments...