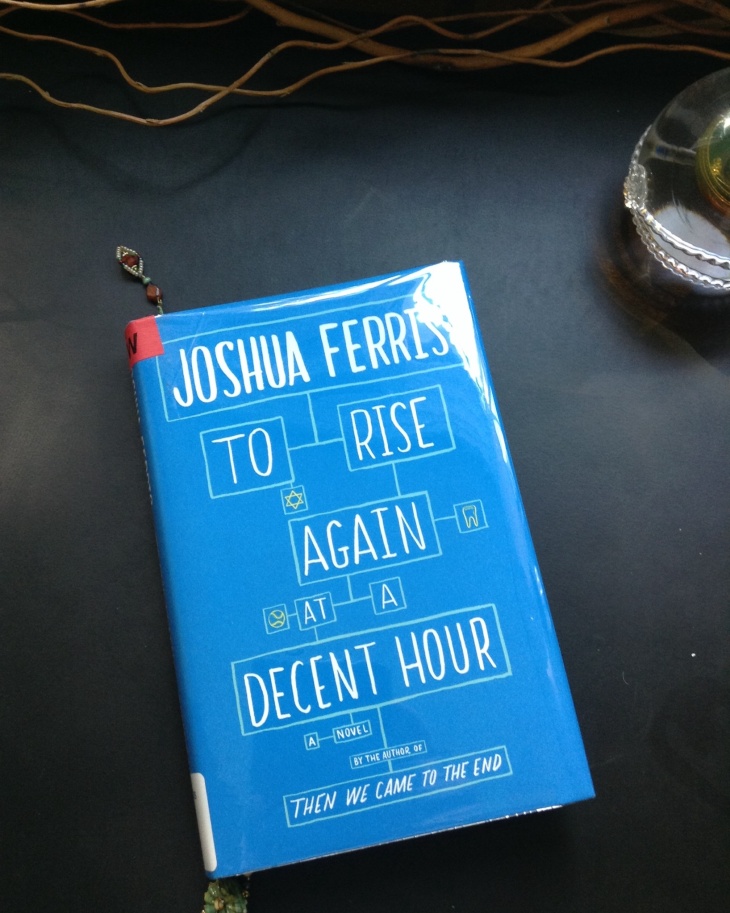 I had to read this book when I saw that it was one of the contenders for the Man Booker Prize, by an American author no less. 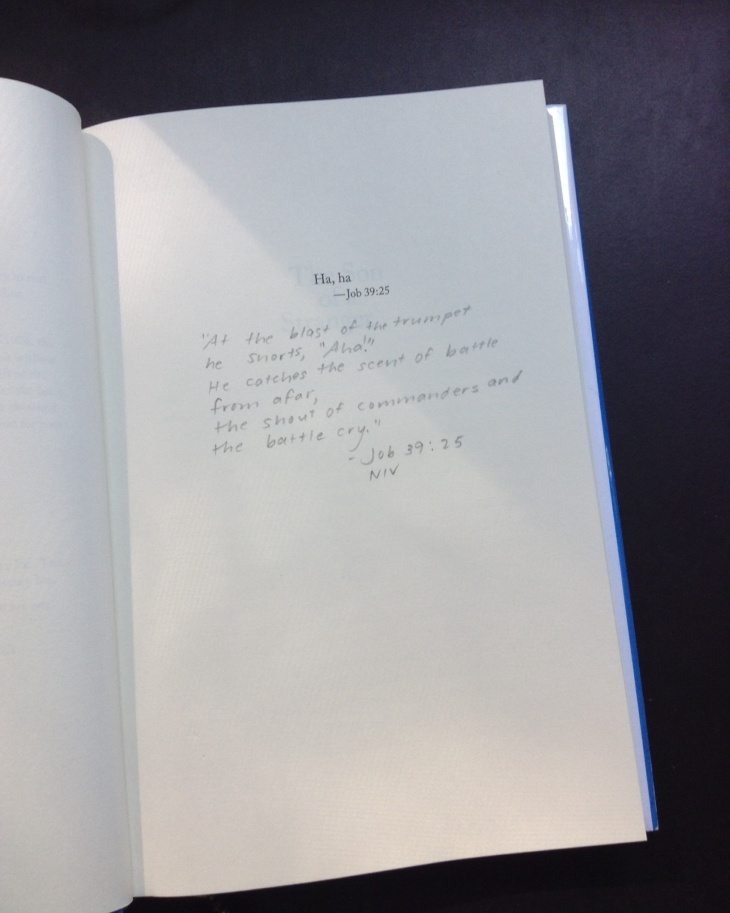 The first thing I did to this library book upon opening it, however, was to correct the epigraph in pencil.

Do not tell me, Mr. Joshua Ferris, that you expect readers to believe a verse in Job, of the Old Testament, says merely, “Ha, ha.” It smacks of atheism.

But, wait. That is exactly what you are addressing, with a plethora of other issues, in your fascinating book about a dentist named Paul O’Rourke in specific, and our American culture in general.

Ignoring the poignancy of everyone’s limited allotment of good mornings, I would not say good morning. Or I would in all innocence forget about our numbered opportunities to say good morning, that horrifying circumscription, and simply fail to say it. Or, I would say good morning sparingly, begrudgingly, injudiciously, or tyrannically…What was so good about it anyway, the too-often predictable, so-called new morning? It was usually preceded by a long struggle for a short drowse that so many people call night. That was never sufficiently ceremonial to call for fresh greetings.

But, by page 200 or so of this sharp wit, one tires of such groaning. One realizes that there is very little that will appease Paul’s  humour. His days consist of attending to his patients, wishing that his ex-girlfriend, Connie, would still love him, and lamenting his life. Not to mention the lives of those around him.

I was not going to spend my Friday night being gawked at. My Thursday nights never caused me any troubles. It was always my Friday, Saturday, Sunday, Monday, Tuesday, and Wednesday nights that caused me troubles. On those nights, I was reduced to eating and drinking. The city (Manhattan) had almost nothing else to offer, and if this great city had almost nothing else to offer, imagine what it was like in lesser cities, or the suburbs, or the small rural towns where so many people are clerks and farmers, and you will understand, finally, why this country has become a nation of fat alcoholics and the nurses and therapists who tend to them.

Paul makes astute observations on those around him, specifically how people (including himself) are obsessed with their “me-machines”, constantly checking them for emails, texts, updates, or even to Google a certain topic. Here is a passage of the very clever dialogue he writes in a conversation with his hygienist:

…she’d say, “Oh, for goodness’ sake. Put the phone away once you enter the street and take a look around you. Why must you always be reading your phone?” I’d tell her, she’d say, “If you know it is merely a distraction from the many things you don’t want to think about, why let yourself be a slave to it?” I’d tell,  her, she’d say, “That is the most blasphemous thing I have ever heard. A little technology could never take the place of the Almighty. We are talking about the Almighty, for heaven’s sake. Mobile phones or no mobiles phones, we still have the primal need to pray, do you we not?” I’d tell her, she’d say, “Sending and receiving email and texts are not a new form of prayer. Do you not understand that that little machine, by taking your attention away from God and the world He created, is only increasing your despair?” I’d tell her, she’d say, “I don’t give a fig for the world it’s created. It will never rival God’s.

And now we come to the heart of the book, for ultimately this is a book about faith. Or, about being Jewish. Or, about not having any faith at all.

When Paul discovers an unknown source has put up a web site in his name, and is delivering emails to his box, he is most disconcerted. They are very personal, and they are very insightful about who he is as a person.

I know it must be uncomfortable for someone to pop up out of nowhere and diagnose your troubles with pinpoint accuracy. I don’t think you’re an animal in a cage-far from it. You’re the full measure of a man, thoroughly contemporary, at odds with the America dream of upward mobility and its empty material success, and in search of real meaning for your life. I should know, Paul, I was there once, too. In fact, you might even say that you and I are one and the same.

The rest of the novel takes us through Paul’s effort to discover the source of these emails, and in so doing examines the role of the believer. It is a powerful book, which has given me much to think about. If this is truly how the majority of Americans think, we have become a lost nation.

I don’t know how To Rise Again At A Decent Hour will fare in the Man Booker competition, but I think the original, creative writing of Joshua Ferris deserves to have brought it to the short list so far.