I was alone in the world and in the evening I watched the river as I ate.

This sentence, on the very first page, pierces me with its loneliness. But when our narrator, Benia, joins the Red Army to fight on the Romanian front, he finds he is not alone anymore.

He met Pavel when he was hidden from the road, behind a wall, heating up water to make some tea. They met Kyabine, who was built like a lumberjack and seemed a bit slow, when he watched them playing dice in the middle of the street. They invited Sifra, who never had any trouble with anyone, to help them build a hut in the pine forest where they could endure the winter, and the group became four.

They discover a pond, which they keep to themselves, and Pavel and Kyabine splash in it like children. They play dice and gamble tobacco, or roll it into cigarettes. They take turns sleeping with a watch, taken off of a fallen soldier, that has a picture of a woman inside it. When Pavel gets up in the darkness, he gently wakes Benia to accompany him; Benia is his comfort from the terrible nightmares that come in the night.

Their friendship charms me.

The tenderness of their youth charms me.

There is an innocence and joy about the comrades, about the four soldiers, that charms me.

And, there is a sorrow lying underneath the joy that is almost unbearable.

Once, while trying to capture a horse, they became separated.

So I spoke in my head to my parents: Don’t believe what you see. I told them: There’s Pavel, Kyabine and Sifra somewhere in the field, so don’t worry.

I sat down in the grass.

I watched the sun sink beteeen the grass stalls, and after a while I lowered my head and began to sob. But believe me, it wasn’t out of sadness…

And now I held them both in my arms and I sobbed as I pressed them against me and I swear it wasn’t out of sadness.

You know they have to leave the pond, burning the huts they have built because they don’t need them anymore. They are ordered to advance on the enemy.

A kid they have met, who sleeps in their tent and writes in a notebook with a pencil tied to a string, records their precious days together. They tell him all that they want him to write, reminding him to skip no detail.

When Benia takes the notebook after the kid has fallen, there are only letters. Nothing that could form a word. It does not take away the time they shared as four comrades, but it does point to the impermanence of their lives.

I am as impressed by this book as I ever have been. It caught me by surprise because I don’t like books about war, and I didn’t particularly like Mingarelli’s earlier book, A Meal in Winter.

But, The Four Soldiers? I will never forget it. Reading it caused a worthy sadness.

(The Four Soldiers is also published by New Press.) 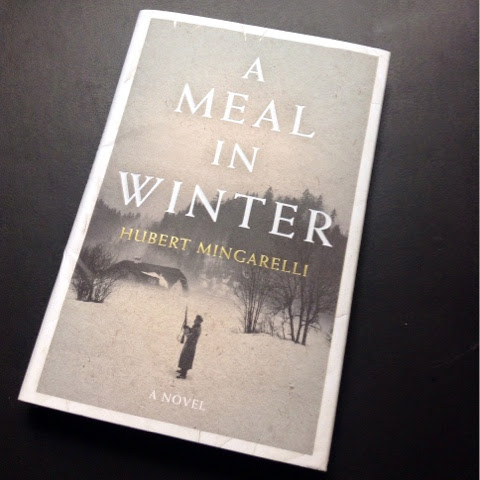 “As we ate, and the soup disappeared, the music changed. The spoons made more noise in the mugs and the saucepan. Suddenly, out of nowhere, Emmerich murmured, ‘We should let him go.'”

A white snowflake embroidered on the hat of a Jew held captive. A salami and half an onion to go with the Italians’ cornmeal which will make soup. A hope that a soldier’s son left at home should not start smoking. And what do these things have in common? Nothing but what they represent: a life without hate. A life without suffering. A life without war.

Emmerich, Bauer, and the narrator beg their commanding officer to be allowed to go hunting. For if they set off in the freezing cold, succeed in finding a Jew, and bring him back, they will not have to be a part of the executions on the base.

When Emmerich sees a group of trees with less frost on them than others, he discovers the hiding place of a young Jew. As the four of them make their way back to base, they discover an abandoned house along the way. Stopping there, they put the Jew in the storeroom, and proceed to make a meal which requires burning almost every piece of wood they can find: chairs, cupboards, doors.

The hot meal gives them comfort, until they must face what to do with their prisoner. For by including him in the merest resemblance of life, a meal, they have taken away his prisoner status.