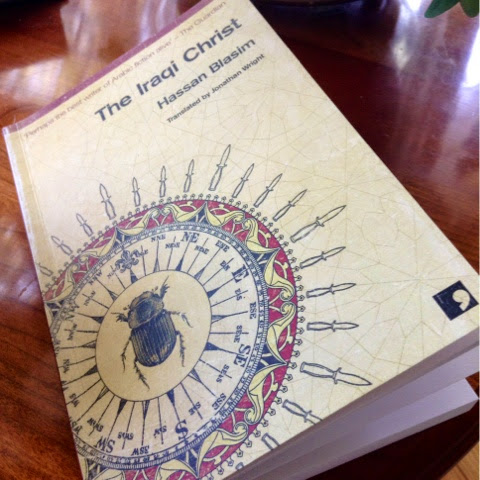 Is it fair not to like a book because the subject matter is vile? Because reading of shit filled septic tanks in which small children drown, violent governments which take the lives of innocent people, and suicide bombers who kill themselves and those around them sickens me?

I did not want to read The Iraqi Christ. I have never liked Arabic fiction because of the depravity that I find within its pages.
Of course when the official IFFP short list was revealed, there was The Iraqi Christ amongst five other titles. I bought it, so that I could participate with the shadow jury, and I am immersed in its pages now.
I find myself with a little boy whose brother has died in sewage, whose father comes back from war missing his leg and his testicles. I find myself in a hole where an old man is eating chunks of flesh from a dead Russian soldier. I find myself in a restaurant where a Christ figure named Daniel, the very name of my own son, cares for his blind and deaf mother. When a suicide bomber sees his devotion, the son is forced to trade places with that man wearing a belt of explosives; he only pushes the button when he sees that his mother has been taken from the restaurant as promised.
The stories are gruesome, while the writing is spectacular. It’s an odd combination for me.
I can’t help but respect the skill with which these stories are written, while at the same time they sink into the pit of my stomach. Where they sicken me.