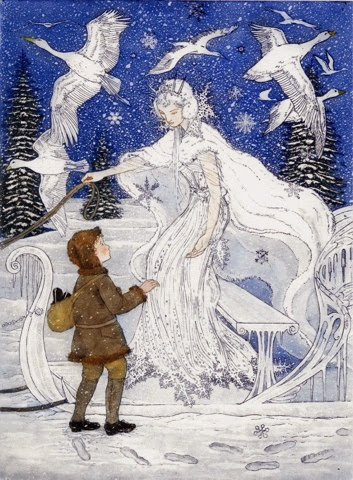 “The snow flakes became bigger and bigger; finally they looked like big white hens. Then they fell to the side, the big sleigh stopped, and the person driving it stood up. The coat and hat were made of snow. It was a woman, so tall and dignified, so shining white—it was the Snow Queen.

“We’re making good time,” she said, “but you’re freezing. Creep into my bearskin fur,” and she placed him in the sleigh with her, put the fur around him, and it was as if he sank into a snowdrift.

“Are you still cold?” she asked and then she kissed him on the forehead. Oh, it was colder than ice. It went right into his heart, which of course was partly a clump of ice. He felt like he was going to die–but only for a moment, then it felt good, and he didn’t notice the cold around him anymore.”

It is has been snowing for quite awhile, the most lovely snow of fresh powder and white. I’ve been sitting by the window reading most of the day, and needing a small break from the heavy book in which I’ve been immersed, I scrolled to “The Snow Queen” by Hans Christian Andersen in my nook.

I’ve forgotten the joy of a truly good tale, a tale not only of excellent writing but of excellent worth. They are the kind of stories which I grew up with, stories we heard from our parents and read from our books; stories we studied in school which entertained while teaching at the same time.

Poor Kai, the little boy in the story, was pierced by an icy fragment in his eye and consequently deceived about all that was lovely and good. So when he hitched his sled to the Snow Queen’s sled he felt no alarm even when she drove off with him to her castle.

How like the White Witch this was! C. S. Lewis’ story has the White Witch courting Edmund in a similar way, not romantically of course, but spiritually. Turning him to the side of evil while the ice and cold so permeates the boy’s heart that he cannot recognize good any longer. 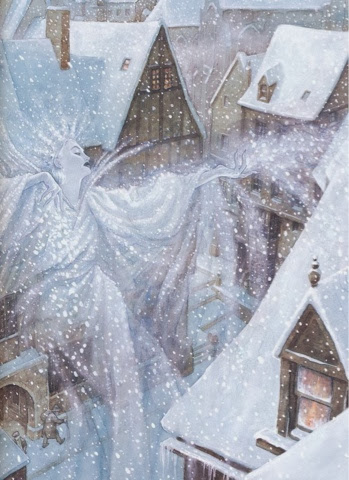 Fortunately, his friend Gerda searches for him and when she gets past the Snow Queen’s sentries she knows exactly what to do:

“Then little Gerda said the Lord’s Prayer, and all the cold was so intense that she could see her own breath. It came out of her mouth like smoke. It became more and more condensed and formed into small bright angels. They grew and grew when they touched the ground, and all of them had helmets on their heads and spears and shield in their hands. They became more and more numerous, and when Gerda had finished her prayer, she had a whole legion around her. They struck with their spears at the dreadful snowflakes so that they broke into a hundred pieces, and little Gerda walked safely and confidently forward.”

Hans Christian Anderson reminds us all about the power of being a little child: “Verily I say unto you, except ye become as little children, ye shall net enter the kingdom of heaven.” And he does it with snow, a Queen, and a setting in northern Scandinavia.

(Special thanks to Tom who’s recent post has inspired me to revisit this beloved author.)