We walked today, my mother and I, on the Riverwalk downtown. It was only 34 F. degrees, a perfect temperature as far as I’m concerned. (I dislike Illinois humidity intensely.)

I put on the white coat from Eddie Bauer which my son bought me years ago, when he was in High School, and then I looked in shock at our two cars in the parking lot. They were so forlorn, when usually there is not a spot to be found.

But, I am finding a certain respite in this self-quarantine. The pace of living is quite lovely. Suddenly, we are forced to focus on the essential: family, good dinners, creating a beautiful environment, reading. I must admit that part of me is reluctant to return to a more frenetic lifestyle.

I’m reading This Side of Paradise by F. Scott Fitzgerald for the 1920 Club hosted by Kaggsy and Simon. I’m doing laundry and making cranberry scones. I’m taking walks, and I’m so grateful for every good thing we are finding out about ourselves, and our lives, in this unique season.

I cannot even tell you how much I love these stories. Never one to be overwhelmed with The Great Gatsby, I am now truly impressed by Fitzgerald’s skill in these stories. Each one is written so beautifully, and the endings, more often than not, pack a serious punch. This is a fabulous collection of brilliant short stories. I’ll put my favorite quotes from each chapter under the titles below, but you’ll have to read the entire story for the full effect of their power:

“Does every man you meet tell you he loves you?”

“Why shouldn’t he? All life is just a progression toward, and then a recession from, one phrase—‘I love you.’ “

“With a furious, despairing energy she rose again and started blindly down the darkness. She must get out. She might be lost in here for days, freeze to death and lie embedded in the ice like corpses she had read of, kept perfectly preserved until the melting of a glacier, Harry probably thought she had left with the others–he had gone by now; now one would know until late next day. She reached pitifully for the wall. Forty inches thick, they had said–forty inches thick!”

“You see, I am fate,” it (the bowl) shouted, “and stronger than your puny plans; and I am how-things-turn-out and I am different from your little dreams, and I am the flight of time and the end of beauty and unfulfilled desire; all the accidents and imperceptions and the little minutes that shape the crucial hours are mine. I am the exception that proves no rules, the limits of your control, the condiment in the dish of life.”

“Vaguely she wondered why she did not cry out that it was all a mistake. It was all she could do to keep from clutching her hair with both hands to protect it from the suddenly hostile world. Yet she did neither. Even the thought of her mother was no deterrent now. This was the test supreme of her sportsmanship; her right to walk unchallenged in the starry heaven of popular girls.”

“You can’t shock a monk. He’s a professional shock-absorber.”

“Happiness was what he wanted-a slowly rising scale of gratifications of the normal appetites-and he had a strong conviction that the materials, if not the inspiration of happiness, could be bought with money.”

“He sailed home on the wings of desperate excitement, quite resolved to fan this spark of romance, no matter how big the blaze or who was burned. At the time he considered that his thoughts were unselfishly of her; in a later perspective he knew that she had meant no more than the white screen in a motion picture; it was just Samuel-blind, desirous.”

Did I do my part to intrigue you? Seriously, these are fantastic stories… 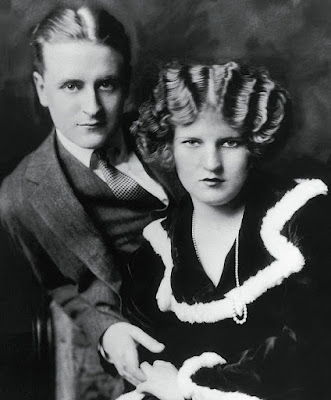 I’d like to say that my interest in this story came first from F. Scott Fitgerald’s writing. Or, even from the 1920s themselves. It didn’t. It came from the hair. Because a bob is my very favorite cut, the cut that I’ve worn most frequently for the last twenty years. (Although my curls are not in the formed waves you frequently see on Zelda. Look at the photograph of her above, and tell me she doesn’t look absolutely charming. Schizophrenic or not.) 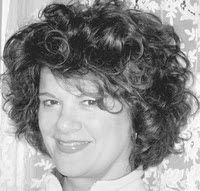 A few years ago when I came to school after Santo had given me another fabulous cut, our Art teacher said, “Your haircut reminds me of Bernice.”

“Yes, from that short story by Fitzgerald. You know, Bernice Bobs Her Hair,” she replied.
“No,” I said, “I don’t.”

So, when The Classics Circuit Tour came around, with The Lost Generation for its theme, I knew I had to write about this story which is included in the collection Flappers and Philosophers. 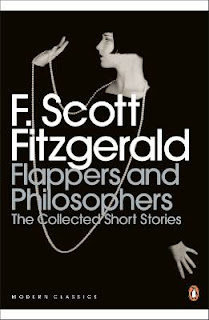 Now that I’ve read the story, I’m not certain that resembling Bernice is a compliment. Although it’s certainly preferable to me than being compared to her cousin, Marjorie. Bernice is visiting her cousin from Eau Claire, where she was perfectly comfortable driving her own car, living her own life. But, in Marjorie’s world a girl lives on her charms. And one of the ways that her charms can be measured is by the number of times she is cut into during a dance.

No matter how beautiful or brilliant a girl maybe, the reputation of not being frequently cut in on makes her position at a dance unfortunate. ‘Perhaps boys prefer her company to that of the butterflies with whom they dance a dozen times an evening, but youth in this jazz-nourished generation is temperamentally restless, and the idea of fox-trotting more than one full fox trot with the same girl is distasteful, not to say odious.

At first, Marjorie implores her many beaux to dance with Bernice. Then, when Bernice overhears Marjorie talking to her mother about Bernice’s lack of charisma, Bernice claims she will go home.

“I guess I’d better go back to Eau Claire–if I’m such a nuisance.” Bernice’s lower lip was trembling violently and she continued on a wavering note: “I’ve tried to be nice, and–and I’ve been first neglected and then insulted. No one ever visited me and got such treatment.”

Marjorie calls Bernice’s bluff, then teaches her how to be more effective socially. Bernice must brush her eyebrows so they’ll grow straight and have her teeth straightened a little; learn to be nice to men who are “sad birds”;  she must neither lean on a dancing partner, nor stand straight up. Bernice learns Marjorie’s skills so effectively, that soon she has not only many dancing partners, but Marjorie’s best beau, Warren.

When Bernice declares that she will bob her hair, Marjorie again calls her bluff, and Bernice finds herself in the barber’s chair much like Marie Antoinette at the guillotine.

Vaguely she wondered why she did not cry out that it was all a mistake. It was all she could do to keep from clutching her hair with both hands to protect it from the suddenly hostile world. Yet she did neither. Even the thought of her mother was no deterrent now. This was the test supreme of her sportsmanship; her right to walk unchallenged in the starry heaven of popular girls.

Courageously, Bernice has her hair bobbed. But, she is not prepared for the reactions she receives from the surrounding crowd, Warren, or even her aunt and uncle. The only thing we could foresee as an eventuality was the little smirk playing around Marjorie’s mouth when Bernice’s tresses were gone.

This is one of those stories with an incredibly ironic ending. Much like O. Henry’s story, The Gift of The Magi, it is not so much about the loss of hair as the reasons behind why it was cut. As well as the things that are learned from doing so.

You can read Bernice Bobs Her Hair online. Really, take the time to read this sensational story which was first published in 1922. Then we can talk about the ending together. It’s one of my favorite pieces by F. Scott Fitzgerald.

(This story was read and reviewed before my Lenten project of reading only the Bible until Easter Sunday.)

As I write this week’s Sunday Salon, I am reviewing Spring Break and the books I have read during my time off. There are precious few: In The Woods by Tana French, Madame Bovary by Gustave Flaubert, half of Eat Sleep Sit by Kaoru Nonomura, and all of The Curious Case of Benjamin Button by F. Scott Fitzgerald. The last one was easy because it’s only a short story, originally published in 1922 in Tales of the Jazz Age by Charles Scribner’s Sons.

Here is the title page of the edition I found on Friday at our local library:

Here is Mr. Roger Button (nicknamed Cuff, at Yale) racing through the streets of Baltimore “to determine whether the darkness of the night had borne in new life upon its bosom.” (p. 5)

“Wrapped in a voluminous white blanket, and partly crammed into one of the cribs, there sat an old man apparently about seventy years of age. His sparse hair was almost white, and from his chin dripped a long smoke-colored beard, which waved absurdly back and forth, fanned by the breeze coming in at the window.” (p. 10)

“But a frantic inspection of the boys’ department revealed no suits to fit the new-born Button. He blamed the store, of course-in such cases it is the thing to blame the store.” (p. 14)

“But Mr. Button persisted in his unwavering purpose. Benjamin was a baby, and a baby he should remain.

One day he brought home a rattle and, giving it to Benjamin, insisted in no uncertain terms that he should ‘play with it’, whereupon the old man took it with a weary expression and could be heard jingling it obediently at intervals throughout the day.” (p. 20)

“One September day in 1910-a few years after Roger Button & Co., Wholesale Hardware, had been handed over to young Roscoe Button (Benjamin’s son)-a man, apparently about twenty years old, entered himself as a freshman at Harvard University in Cambridge. He did not make the mistake of announcing that he would never see fifty again, nor did he mention the fact that his son had been graduated from the same institution ten years before.” (p. 46)

“There were no troublesome memories in his childish sleep; no token came to him of his brave days at college, of the glittering years when he flustered the hearts of many girls. There were only the white, safe walls of his cribe and Nana and a man who came to see him sometimes, and a great big orange ball that Nana pointed at just before his twilight bed hour and called “sun.”

Then it was all dark, and his white crib and the dim faces that moved above him, and the warm sweet aroma of the milk, faded out altogether from his mind.” (p. 59)

The story was incredibly short; it’s amazing that a film lasting approximatley three hours could be made from such a story. Of course, the film added all kinds of details: Benjamin living in the nursing home, adopted by another family, falling in love with the beautiful girl whom he stayed with all of his life. None of these things happened in the short story.

The most redeeming quality of the story to me was how it seemed to scoff at our expectations, especially as parents. Benjamin arrived in the world a complete surprise, backwards as it were, and lived his life from an old man to a baby which completely defied what his father, or any other adult, would have him do.

For that, this book made me smile, and try not to take life so seriously.

Listen to it read aloud here.