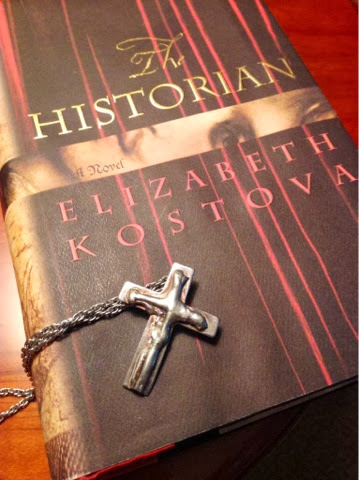 As we close The Historian we discover that the title does not refer to Professor Rossi, nor his student, nor the daughter who has recorded their story. No, the historian is Drakula himself. He states his purpose by saying, “I have become an historian in order to preserve my own history forever.” Like all megalomaniacs, such as Napoleon, Stalin, or Hitler, Drakula’s evil intentions can be traced to selfishness in the extreme. “I vowed to make history, not to be its victim,” Drakula declares. Indeed, he’d rather leave a wake of victims behind him than become one himself.

But, it occurs to me that as often as we are surrounded by evil, we are apt to invite it into our own lives. In pursuing their intellectual curiosity, each character in this novel was lured into Drakula’s lair. He tells them, “You would not be here if you had not wanted to come…you have brought yourself.”

Which brings me to the saving grace, pictured on my edition above as well as within the text itself: the crucifix.

“Where the nearly healed wound had been, in the deepest part of her neck, two small gashes oozed, red and open. There was a little blood on the edge of the white sheet, too, and more on the sleeve of her cheap-looking white gown, where she’d thrown one arm back in her sleep…

” ‘Helen!’ I shook her shoulder gently, but her face did not change. I saw now how haggard she looked, as if she were in pain even in her sleep. Where was the crucifix? I remembered it suddenly, and looked all around. I found it by my foot; the narrow chain was broken. Had someone torn it off, or had she broken it herself in sleep?” (p. 521)

One of my favorite parts of The Historian, or in fact any Dracula story, is the crucifix. Even evil in its extreme is not only aware of the power of the cross, but is daunted by its very existence. Why does a secular book include such a sacred object? Why does Elizabeth Kostova include the power of the cross as does Bram Stoker and others who have written of Drakula?

The Bible tells us: “For the message of the cross is foolishness to those who are perishing, but to us who are being saved it is the power of God. For it is written: “I will destroy the wisdom of the wise: the intelligence of the intelligent I will frustrate.” 1 Corinthians 1: 18-19

Even that of he who calls himself the Historian.

(I loved rereading this novel with Andi and others who joined in with her at The Estella Society. I have taken the liberty, once again, of writing my own thoughts about this excellent novel. You can find other thoughts and more discussion at her site on October 14.)

“The Camera was quiet this morning, nearly empty, and we hurried up a polished staircase to the macabre niche where we’d surprised my father the day before. I swallowed a threat of tears as we entered the tiny room; hours ago, my father had been sitting here, that strangely distant look veiling his eyes, and now I didn’t even know where he was.” (p. 171)

It’s hard to say what I like best about this novel. Is it the relationship between the father and daughter? The strong tea served in porcelain pots they enjoy together across Europe? Is it the libraries, such as the Radcliffe Camera above, filled with papers and maps, card catalogs and research? Or, is it simply the mystery itself of Rossi’s disappearance, perhaps abduction, and our heroine’s father slowly disclosing the horrible tale before he, too, disappears? His is a tale which involves Dracula and crypts, menacing shadows and bashed in heads, obscurely veiled letters and mysterious disappearances. Not to mention little books with drawings of dragons left on library tables.
I eagerly plunge ahead, unable to wait until October 14 for the final posting. Even though I’ve read this charming and suspenseful novel before, it does not disappoint.
In fact, it makes me long to visit Istanbul, and the remote places of Romania, myself.

Find discussions at the midway point on The Estella Society.
(Arti of Ripple Effects wrote a wonderful post on an ultra modern library in Toronto. As I read her words, and looked at her pictures, I was comparing that library with the ones described by Elizabeth Kostovo in The Historian. The traditional library with classic lines is where my heart is most closely aligned. But it’s interesting to consider all types. Do you have a favorite?)