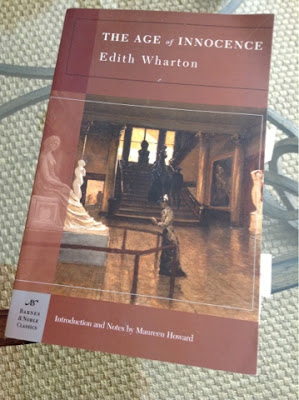 Edith, Edith, Edith. Are you writing of the upper crust society on New York’s Fifth Avenue during the 1870’s, or are you writing of the town in which I currently live in the year 2013? For what is mankind, when left to its own nature, if not vain and superficial and materialistic?
I admire Newton Archer for seeing enough originality in Countess Ellen Olenska to fall in love with her. I admire Ellen herself for not succumbing to society’s opinion that she must stay in her untenable marriage for the sake of propriety and means. She flaunts social mores, doing as she sees fit, yet neither she nor Newton take it to the extreme of adultery. Physically, anyway; what they feel for each other must surely be called some form of adultery even if it is never acted out.

“Is it your idea, then, that I should live with you as your mistress–since I can’t be your wife?” she asked.
The crudeness of the question startled him: the word was one that women of his class fought shy of, even when their talk flitted closest about the topic. He noticed that Madame Olenska pronounced it as if it had a recognized place in her vocabulary, and he wondered if it had been used familiarly in her presence in the horrible life she had fled from. Her question pulled him up with a jerk and he floundered.
“I want–I want somehow to get away with you into a world where words like that–categories like that–won’t exist. Where we shall be simply two human beings who love each other, who are the whole of life to each other; and nothing else on earth will matter.”

I pity his wife, May Welland, who is slowly becoming a woman who eerily resembles her mother.

“As she sat thus, the lamplight full on her clear brow, he said to himself with a secret dismay that he would always know the thoughts behind  it, that never, in all the years to come, would she surprise him by an unexpected mood, by a new idea, a weakness, a cruelty or an emotion. She had spent her poetry and romance on their short courting: the function was exhausted because the need was past. Now she was simply ripening into a copy of her mother, and mysteriously, by the very process, trying to turn him into a Mr. Welland.”

Is there anything more horrifying than being cast into a mold? And yet, if we try to escape it, are we then outcasts of society? Ultimately, to which do we hold ourselves true: society or our hearts? This is the decision which Newton is faced with, and he walks a lonely path in discovering his destination.
Edith’s 151 birthday was January 24, 2013. I read this in celebration of her writing with Audrey of Books as Food, as well as one of my selections for the Classics Club. I also bookmarked this article from the Huffington Post entitled Edith Wharton Birthday: 11 Reasons The Author Was a Badass. The reasons listed here are quite compelling, not the least of which is that Wharton won the Pulitzer Prize in 1921 for The Age of Innocence.