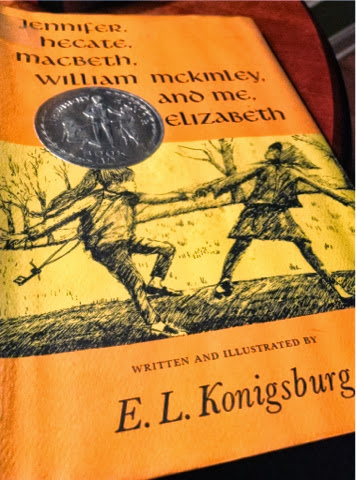 Do you remember this little book from 1968 calling to you from an elementary school’s library shelves? I remember it clearly, but probably more for the cover (which has always appealed to me) than the content.
It’s one of those children’s books which fall into the category I call Adults-Will-Appreciate-This-Book-More-Than-Children.
And now the children at my elementary school won’t even know about it because it was pulled from the shelves several years ago. I suspect one of the main reasons is because it contains the word “witch”. In several places. Even though it’s not about making spells, it’s about making friends.
Lonely Elizabeth walks to school alone, until one day she sees a shoe dangling from a much smaller foot in the tree above her. The girl owning the shoe, and the foot, is Jennifer, a self-proclaimed witch who befriends Elizabeth and initiates her as an apprentice witch.
The story is utterly charming, filled with experiences of my own childhood: mothers leaving beauty parlors with piled up hairdos, shopping at the A & P, feeling lonely but not minding it too much because the popular girl is “two-faced and mean”. Who wouldn’t prefer being alone? Who wouldn’t rather befriend Jennifer and march around a magic chalk circle after spilling a drop of blood (each) and a drop of spit (each) to seal a promise?
I certainly would like to be her friend for the sheer imagination she possesses, let alone indifference to popular opinion. Which has never been a friend of mine.
(E. L. Konigsburg was the only person to win both the Newbery Medal for the Mixed-Up Files of Mrs. Basil E. Frankweiler and a Newbery Honor for Jennifer, Hecate, Macbeth, William McKinley, and me, Elizabeth in the same year, 1968.)