Skip to content
December 13, 2013October 10, 2014 Posted in Donna Tartt14 Comments
I am still thinking of Donna Tartt. The Goldfinch. And all the ways her writing effects me.
One of the things that I love about Donna Tartt’s writing is how she always opens doors to me. She has given me a whole new point of view on what it is to be a student in the classic languages of Latin and Greek. She has shown me the abyss of drug and alcohol abuse. She portrays Christmases which are less than merry and bright. She makes it desirable to be an avid reader of classic literature such as The Idiot, to whom Prince Myshkin is referenced in the last part of her latest book. And in reading The Goldfinch she has not only brought to life a previously obscure to me painting, but music which I searched on the spot. And immediately downloaded.
You, probably, have already heard of these composers. You, probably, already have them in queue on you iPod. But as for me, I had heard of neither Giovanni Pierlugi da Palestrina, who was an Italian Renaissance composer of sacred music, nor Arvo Part, an Estonian composer who based his minimalist style on Gregorian chant.
Both of these composers write music which is one of Tartt’s gifts to me this Christmas. For it is by her writing of these men that I am now aware of their glorious music.
December 12, 2013October 10, 2014 Posted in Donna Tartt30 Comments 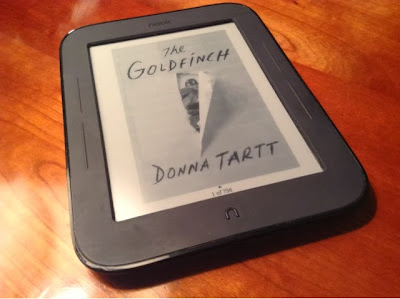 Here is The Goldfinch by Carel Fabritius, Rembrandt’s pupil and Vermeer’s teacher, around which the novel is centered: 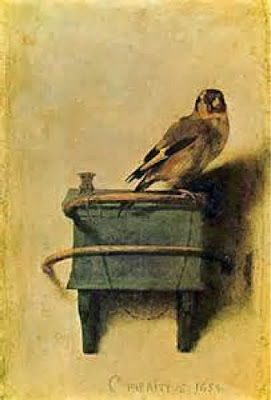 Poor, little goldfinch. A famous bird he may be, especially now that he has been written about so eloquently by such a fascinating woman, but still he is caught with a chain by his foot. He is not free to fly. To find his own way. To be his own bird. He is trapped against his will, not of his own design.

This is the crux upon which Tartt has hung her novel. The New York Times describes The Goldfinch as thus: “a painting smuggled out of the Metropolitan Museum of Art after a bombing becomes a boy’s prize, guilt and burden.”  But, that is similar to the review I once read which summarizes The Secret History as being about hubris.

There is so much more.
Donna Tartt opens The Secret History with the mention of a fatal flaw.  For Richard, the narrator of The Secret History, it was beauty at any cost. For Theo, the narrator of The Goldfinch, it is the ruthlessness of life: the harm done to a powerless boy when his parents divorce; the harm done when his mother dies in an explosion at the MOMA in New York  (similarly, Fabritius also died in an explosion at the Delft factory in Holland); the harm done when his grandparents don’t want him, much less his alcoholic father with whom he goes to live in Nevada. If it were not for Hobie, the antique furniture restorer, he would have no one to count on. Theo can’t even wholly depend on his often charming Russian friend, Boris.
Together they drink. Steal. Practically overdose on drugs. Commiserate about the worthlessness of their fathers.
There is no one in Theo’s life who is a dependable person, let alone a moral compass. Almost every character wallows in compromise, selfishness, and irresponsibility. Hobie, and his dear friend’s niece, Pippa, are the only two who shelter from the storm. Even Pippa, who suffers under the same trauma as Theo does because they were both in the museum when the bomb exploded, has only become his “morphine lollipop.” In other words, a person who can comfort, but not sustain, another.

This novel is about loneliness, sorrow and joy. It is about art and beauty. It’s about fate and questioning God. It’s about the deceitfulness of the heart which Tartt expounds upon at the closing of her book.

“How do we know what’s right for us? Every shrink, every career counselor, every Disney princess knows the answer: “Be yourself.”  “Follow your heart.”
Only here’s what I really, really want someone to explain to me. What if one happens to be possessed of a heart that can’t be trusted–? What if the heart, for its own unfathomable reasons, leads one willfully and in a cloud of unspeakable radiance away from health, domesticity, civic responsibility and strong social connections and all the blandly-held common virtues and instead straight towards a beautiful flare of ruin, self-immolation, disaster?”

I’ll explain it to you, Theo. The question is not “What if the heart can’t be trusted?” There is no doubt about hearts being treacherous for I, too, once believed in the adage to follow your heart. But, as anyone who does so knows, that is not the path to happiness. Why? Because “the heart is deceitful above all things, and desperately wicked: who can know it?” (Jeremiah 17:9)

And yet we try to follow what we think we want. We long to understand our motivations. Our wounds. And above all, our purpose.

Surely we’re more than chained, helpless birds, beautiful to look at but unable to fly away.

April 28, 2011 Posted in Donna Tartt15 Comments
If you could see one book turned into the perfect movie–one that would capture everything you love, the characters, the look, the feel, the story–what book would you choose? ~Booking Through Thursday

Donna Tartt’s The Secret History has long been in my top ten list of favorite novels. From the opening paragraph:

Does such a thing as “the fatal flaw,” that shadowy dark crack running down the middle of a life, exist outside literature? I used to think it didn’t. Now I think it does. And I think that mine is this: a morbid longing for the picturesque at all costs.

the visualization of this novel remains as clear in my mind as the first day I read it 15 years ago. Can you picture this in the film?

Trees creaking with apples, fallen apples red on the grass beneath, the heavy sweet smell of them rotting on the ground and the steady thrumming of wasps around them. Commons clock tower: ivied brick, white spire, spellbound in the hazy distance. The shock of first seeing a birch tree at night, rising up in the dark as cool and slim as a ghost. And the nights, bigger than imagining: black and gusty and enormous, disordered and wild with stars.

As far as I’m concerned, the mood that Donna Tartt was able to convey with her writing is beyond memorable. Beyond fantastic. Beyond  my imagination. In fact, the more I think about it, the more I realize it doesn’t need to be made into a film at all. The images are already emblazoned on my mind. It’s a college I’ve always wished I could have attended, the separate classroom with six Greek scholars and a cup of Mont Blanc pens at one’s disposal…

It was with something of a shock that I saw it for the first time – a white room with big north-facing windows, monkish and bare, with scarred oak floors and a ceiling slanted like a garret’s. On my first night there, I sat on the bed during the twilight while the walls went slowly from gray to gold to black, listening to a soprano’s voice climb dizzily up and down somewhere at the other end of the hall until at last the light was completely gone, and the faraway soprano spiraled on and on in the darkness like some angel of death, and I can’t remember the air ever seeming as high and cold and rarefied as it was that night…

What a wonderful aura of an academic environment.

Except for the murder.