There’s nothing I like quite so much in a book as a story. And, who better to bring us a story of great imagination than the Germans? I think of tales from the Brothers Grimm, into which Tyll could fit in small ways: there is a dark forest, a poisoned apple, a witch, a laughing man on a tightrope, and an executioner. There are Jesuits and a hangman, forged testimonies, and an abundance of fear from the villagers.

Combined with the fear is no small amount of paranoia, which, in my opinion, seems completely justified when someone can just come into your home, dislocate your shoulders, and try you for sorcery with no justification.

Dr. Oswald Tesimond and Dr. Kircher, both Jesuits, meet Tyll when he is but a boy, left alone in the forest to guard a cart filled with flour all night. It actually ends up being two nights, as his mother left him to return home when birthing pains suddenly came upon her. Who knows what terrors he endured? But, when his father and two other strong men come upon him, Tyll is up in a tree, covered in flour, and the donkey which had been pulling their cart is beheaded. He is wearing the scrap of flesh bearing the donkey’s two ears on his head.

It is right after this accursed state that’s the two Jesuit priests come upon him, and decide that it is time to visit the boy’s home, suspicious that they have crossed paths with a warlock.

How easily, Dr. Kircher thinks, pity could overcome you, but you must not permit yourself to believe the appearance, for they are in league with the greatest power of the fallen world, and their lord is with them at every moment. That’s why it is so dangerous: during the trial, the devil can always intervene. (p. 86)

Groats, small beer, pentagrams, spells and superstition, paranoia, witch hunts and hangings. I am caught up in this medieval world that Kehlmann has created, that strangely resembles our own. Suspicions forced into fact. People wrongly accused, then killed. Tyll’s father, Claus, is hanged, and Tyll decides he must leave. Nele, he says, is coming with him.

She knew she must not think,or else she would lose her courage; or else she would stay here, as was in store for her; but he was right, you really could leave. The place where everyone thought you had to stay – in actuality nothing was keeping you there. (p. 118)

How strange it is to read this book while under quarantine from the Corona virus. The disease, poverty, and human ills become all the more tangible to me, safely ensconced within my own home but well aware of the evils without.

It is when we land in the middle of the story of the Winter King, Frederick V, and the Winter Queen, Elizabeth Stuart, that I feel we have wandered off course. Is this a story of fiction, or am I suddenly in a history book? My enthusiasm immediately dwindled in the last third of the book, which for me, ruined what had been a perfectly intriguing novel up until then. 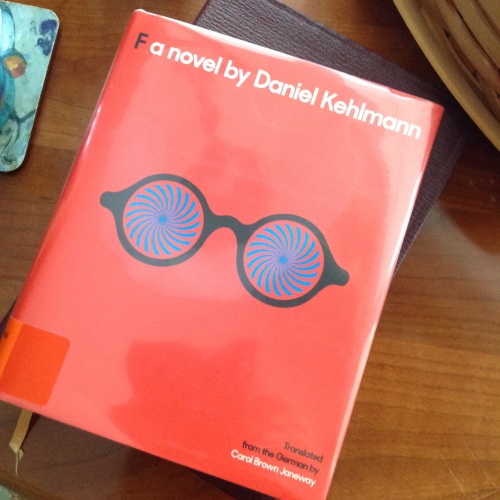 Arthur is the father, who wants to be a writer, and suddenly leaves his three young sons after taking them to a hypnotist one evening. He claims hypnotism has no effect on him, but it seems to be one of the many lies the characters wrap themselves up within.

Martin, the eldest, becomes a fat priest who doesn’t believe God exists. He spends his time perfecting his skills with a Rubiks Cube as if the championship ahead is the most worthy goal of his life.

Ivan becomes an art forger with his lover, Heinrich.

And Eric, Ivan’s twin, becomes a financial consultant who completely mismanages the enormous funds of extremely wealthy clients. He lies to his clients, he lies to his wife, he lies to his daughter, his girlfriend and most significantly to himself. He cannot face what is his fault.

Their lives are a parody of what it means to be successful, which is something they each search for but cannot attain.

This is wisdom for “getting somewhere”? It would be funny if it wasn’t so sad.

Daniel Kehlmann was born in Munich in 1975 and lives in Berlin and New York. His works have won the Candide prize, the Doderer prize, the Kleist Prize, the Welt Literature Prize, and the Thomas Mann Prize. Measuring the World was translated into more than forty languages and is one of the greatest successes in postwar German literature.

F a novel, is the second book I’ve read for the IFFP long list. Find other reviews from the Shadow Jury at 1stReading’s Blog, David’s Book World, Messengers Booker, and roughghosts.