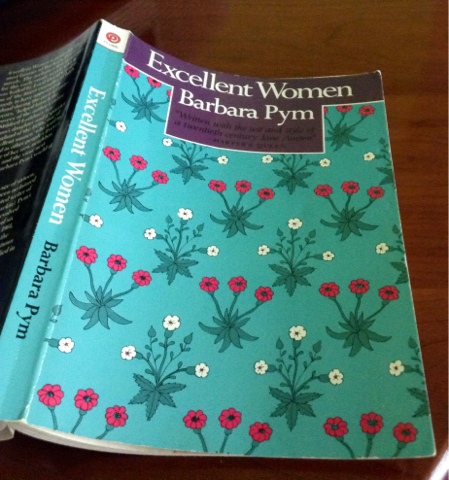 As pleased as I am to be joining those who are participating in Barbara Pym Reading Week, hosted by Thomas of My Porch, I must confess to a bit of…boredom? I know Barbara is supposed to be funny, and certainly, there are several situations which are just that. But humorous is not the word that I would use to describe her writing as much as bland.
I abandoned A Glass Of Blessings halfway through after repeated attempts. I finally asked myself why I was persevering so diligently with such little pleasure. Excellent Women was easier to get going, but still I tired of reading about washing up, movers, bits of fish for luncheon, bossy old ladies, and the loneliness in Mildred’s life.
She never made me feel sorry for her. In fact, I admired her fortitude and independence as she lived in her flat alone once her friend Dora had moved on. Mildred is single, plain, and considers herself uninspiring when she compares herself with the Napiers across the hall, or Allegra Gray, the widow who moved in with her friends Julian Malory and his sister, Winifred. She feels dreadful when she is caught unexpectedly by Everard Bone while she is wearing a housedress, without stockings, covered by a cardigan. One day after lunching with Mrs. Gray she decides that what she really needs is a lipstick. This is one of the few scenarios which utterly charmed me, perhaps because I have been as daunted in searching for the right shade as our plain Mildred seems to be.

“I strolled through a grove of dress materials and found myself at a counter piled with jars of face-cream and lipsticks. I suddenly remembered Allegra Gray’s smooth apricot-coloured face rather too close to mine and wondered what it was that she used to get such a striking effect. There was a mirror on the counter and I caught sight of my own face, colourless and worried-looking, the eyes large and rather frightened, the lips too pale. I did not feel that I could ever acquire a smooth apricot complexion but I could at least buy a new lipstick, I thought, consulting the shade-card. The colours had such peculiar names but at last I chose one that seemed right and began to turn over a pile of lipsticks in a bowl in an effort to find it. But the colour I had chosen was either very elusive or not there at all, and the girl behind the counter, who had been watching my scrabblings in a disinterested way, said at last, “What shade was it you wanted, dear?”
I was a little annoyed at being called ‘dear’, though it was perhaps more friendly than ‘madam’, suggesting as it did that I lacked the years and poise to merit the more dignified title.
“It’s called Hawaiian Fire,” I mumbled, feeling rather foolish for it had not occurred to me that I should have to say it out loud.” (p. 130)

Of course this book is about far more important things than buying a particular shade of lipstick; it’s about excellent women. The phrase is used numerous times throughout the narrative…

“Of course you’ve never been married,” she said, putting me in my place among the rows of excellent women…” (p. 27)
“But my dear Mildred, you mustn’t marry,” he was saying indignantly. “Life is disturbing enough as it is without these alarming suggestions. I always think of you as being so very balanced and sensible, such an excellent woman.” (p. 69)
“I felt that the ‘among’ spoilt it  a little and imagined a crowd of us, all excellent women connected with the church, hearing the news (that Julian Malory and Mrs. Gray are engaged).”  (p. 132)
“It was not the excellent women who got married but people like Allegra Gray, who was no good at sewing, and Helena Napier, who left all the washing up.” (p. 170)
“You could consider marrying an excellent woman?” I asked in amazement. “But they are not for marrying.” (p. 189)

“It is a known fact that people like clergy men’s daughters, excellent women in their way, sometimes rush in where the less worthy might fear to tread.” (p. 221)

What is it that Pym is telling her readers? By the time we get to the end of the story, Mildred Lathbury has seen the dissolution of Allegra’s engagement, as well as the way that Helena has taken back her husband while neither of them are loyal to each other. Just because these women have had their flings, their engagements, their marriages, they do not qualify as excellent women. Perhaps, Pym suggests to me, being an excellent woman is worth its weight, for they are the ones who are respected and esteemed. The excellent women of this world are the ones who have “a full life after all.”