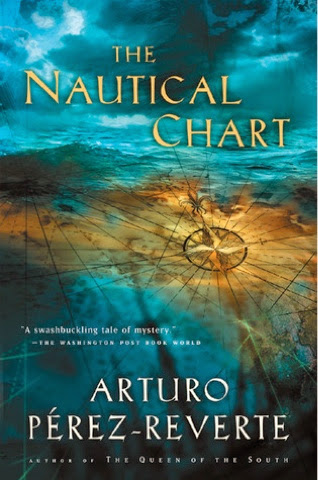 The story opens in Barcelona, with our hero Manuel Coy attending an auction. It isn’t that he has money to spend, or a particular item he yearns to possess. It’s that he’s bored, and restless, and a little lost ever since being suspended for grounding the forty-thousand-ton-container-ship, Isla Negra, on his watch.
Right away, I was entranced by Coy. How it is that a sailor can resemble a cowboy, and here I’m comparing Coy to Owen Wister’s The Virginian, I’m not quite sure. But they both have an integrity defined by what they judge to be right. They’re both independent, and brave, and loathe to follow rules for rules’ sake.
Coy’s attention is caught between two bidders, who each seem to be fighting for an Atlas Maritimo de las Costas de Espana, the work of Urrutia Salcedo. One bidder is a beautiful blonde, covered with freckles; the other is a man in a ponytail who ultimately succumbs after her bid at five times the opening price.
What is it about this map, this woman, this gray pony-tailed man who have grabbed Coy’s attention? He is determined to find out, as he travels from Barcelona in search for the woman, Tanger Soto, who works for the Museo Naval in Madrid.
Apparently a Jesuit ship, the Dei Gloria, was attacked by a xebec corsair on February 4, 1767. The pirate ship did not expect the Dei Gloria to fight back, which it did, and ultimately both sank. But the Urrutia map seems to hold the location where the Dei Gloria lays, and it is this ship that Tanger wants desperately to find.
Why? And why is the gray ponytailed man in pursuit of her and the ship himself? This is the core of the mystery, a mystery which becomes more and more intriguing as one continues through the novel. But, more fascinating to me is the character of Coy. He is a mystery in and of himself, a man of the sea and a reader as well.
The books that he reads are all relevant to ships. Sailing. Sea. He tells us he has gone through a Conrad period, a Stevenson period, and a Melville period. But soon after that passage, I began recording the titles and authors that Perez-Reverez includes in this spectacular novel. Because if they’re important enough to mention in his work of fiction, they’re important to me to know more about.
The titles Perez-Reverte has included in The Nautical Chart are:
Thunderball by Ian Fleming
The Alexandria Quartet by Durrell
Mutiny on The Bounty by Charles Nordhoff and James Norman Hall
Men Against the Sea by Charles Nordhoff and James Normal Hall
Pitcairn’s Island by Charles Nordhoff and James Norman Hall
The Death Ship by B. Traven
The Inheritors by William Golding
The Mirror of The Sea by Joseph Conrad
Heart of Darkness by Joseph Conrad
Green Fire by Peter William Rainer
The Maltese Falcon by Dashiell Hammett
The Dain Curse by Dashiell Hammett
The Adventures of Tintin by (Belgian cartoonist) Herge
The Secret of the Unicorn by Herge
Red Rackam’s Treasure by Herge
Treasure Island by Robert Louis Stevenson
Moby Dick by Herman Melville 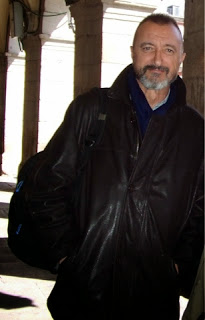 Internationally acclaimed author Arturo Perez-Reverte was born on November 25, 1951 in Spain, where he lives. He has been a member of the Spanish Royal Academy since 2003. His best selling books have been translated into nineteen languages in thirty countries and have sold millions of copies.