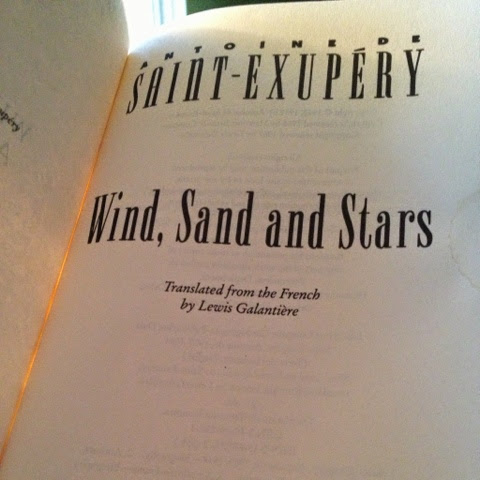 I have read The Little Prince. I have read Night Flight. But this book by Antoine de Saint-Exupery unites them under the larger umbrella of flight. Of what it was, exactly, to be a pilot in the 1930s. I can scarcely imagine how a pilot can also be so skilled a writer. After two evenings, I am only on page 38 because I must stop and contemplate all the things he has to say.
On courage:
“You’ll be bothered from time to time by storms, fog, snow. When you are, think of those who went through it before you, and say to yourself, ‘What they could do, I can do.’ “
On money:
“True riches cannot be bought. One cannot buy the friendship of a Mermoz, of a companion to whom one is bound forever by ordeals suffered in common. There is no buying the night flight with its hundred thousand stars, its serenity, its few hours of sovereignty. It is not money that can procure for us that new vision of the world won through hardship…”
On loneliness:
“When we exchange manly handshakes, compete in races, join together to save one of us who is in trouble, cry aloud for help in the hour of danger-only then do we learn that we are not alone on earth.”
On fear:
“He knows that once men are caught up in an event they cease to be afraid. Only the unknown frightens men. But once a man has faced the unknown, that terror becomes the known.”
It is quite interesting to read this book on the heels of The Sorrow of Angels. Imagine two mail carriers, one from Iceland and the other from France, who face the elements with indomitable courage. I couldn’t have planned a better pairing of novels if I’d tried.
More on this one, Wind, Sand and Stars, when I finish. Thanks to Therapy Through Tolstoy for the inspiration to pick it up.